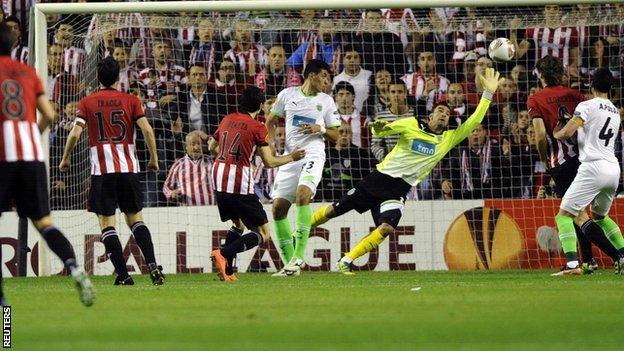 Bilbao levelled the tie at 2-2 when Markel Susaeta drove in a shot.

Ricky van Wolfswinkel lashed in a strike for Sporting before Ibai Gomez drilled in an effort at the other end.

The tie was heading for extra time only for Llorente to pounce at the near post with an opportune finish.

Llorente's goalscoring instinct for the winner and overall forward play in helping to set-up his side's two other goals was the foundation for Bilbao's success and showed why he is such a sought-after striker.

Nicknamed the Lion King, his contribution also helped the San Mames club, who beat Manchester United in the last 16, reach their second final in major European football after their last appearance in 1977 ended in a defeat by Juventus.

Bilbao took 17 minutes to make their home advantage count as Llorente chested the ball down for Susaeta to apply the finishing touch from just inside the area.

The Spanish side appeared on top only for Van Wolfswinkel to put Sporting back in the ascendancy when he latched on to team-mate Xandao's inadvertent lay-off to send a shot past keeper Gorka Iraizoz on the stroke of half-time.

There was still time left in the first half for Bilbao to respond. Again it was Llorente who helped create the opening, demonstrating an exquisite touch before laying off the ball for Gomez to level the tie at 3-3 on aggregate with a low strike.

Sporting survived a scare when a Javi Martinez header came back off the post before Bilbao were saved by the woodwork when former Liverpool left-back Emiliano Insua's low deflected strike hit the post with keeper Gorka Iraizoz beaten.

Sporting boss Ricardo Sa Pinto had played for his club in their 2005 Uefa Cup final defeat against CSKA Moscow, but he was denied the opportunity to go one step further as coach by his side's heartbreaking defeat.

Extra-time was looming when Llorente beat his marker to get a foot on the ball and divert in a shot off the post to send Bilbao to the 9 May final in Bucharest, Romania.

Athletic Bilbao striker Fernando Llorente: "This is incredible. It's the first time that I have wanted to cry on the pitch. This is beyond words. This is the best.

"We made history, and I hope we continue to do so in the final, which I hope we can win because these players and these fans deserve it."