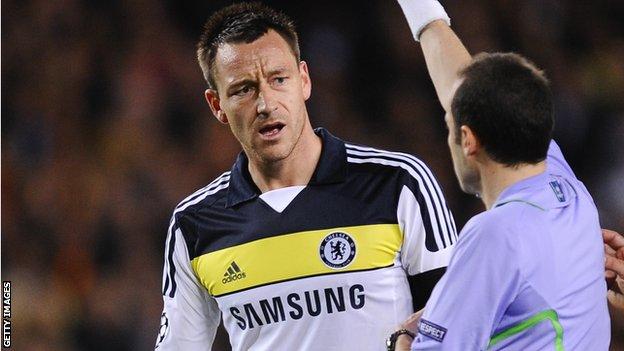 Frank Lampard has said he is "gutted" that Chelsea captain John Terry will miss the Champions League final.

Lampard will lead the side at Bayern Munich's Allianz Arena next month after Terry was dismissed in the 3-2 aggregate win over Barcelona.

The England midfielder believes Terry's challenge on Alexis Sanchez looked worse than it was.

Lampard said: "I'm gutted for him because everyone knows Chelsea's in his heart. There was no real malice in it."

John Terry: Will be forced to watch in Munich after driving a knee into the back of Alexis Sanchez.

Branislav Ivanovic: Talked his way out of appearing in the final when booked for dissent for reaction to the award of a penalty for Didier Drogba's foul on Cesc Fabregas.

Ramires: His audacious chip over Victor Valdes came after he was booked for dissent late in the first half.

Raul Meireles: Will pay a heavy price for the 90th-minute booking he received for a late sliding tackle on Javier Mascherano.

Branislav Ivanovic, Ramires and Raul Meireles are also suspended for the final in Munich on 19 May after each was booked as Chelsea came back from 2-0 behind on Tuesday to advance.

But Lampard said that the trio, along with Terry, who later apologised to fans, deserved huge credit for playing their part in the Blues' progress to the final.

"You've got to feel for all of them and they're massive players that we'll miss," added Lampard.

"Whether we win or lose, those players who miss the final take complete credit for being involved anyway."

Having masterminded a Champions League semi-final victory and led Chelsea to the FA Cup final, interim manager Roberto di Matteo has gone from rank outsider for the manager's job to one of the favourites.

And Lampard has described Di Matteo's work since taking over from Andre Villas-Boas in March as "amazing".

"I can't speak highly enough of him," added Lampard.

"Look at our record - it's not a coincidence. He has got the group with an atmosphere, he has created a spirit and determination.

"The players were here anyway but what he has done in bringing them together and getting results like [Tuesday's] and others from before is amazing."