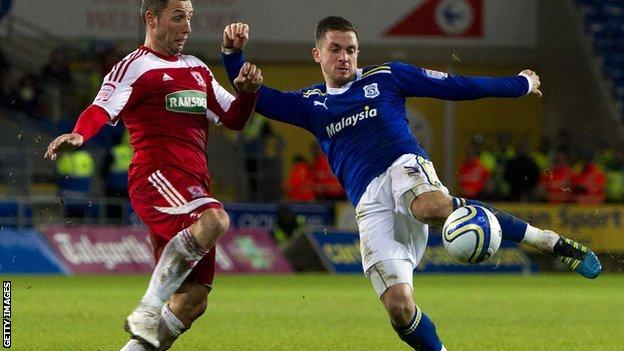 Andy Campbell says Cardiff City hold the advantage over another of his former clubs, Middlesbrough, in the race to secure the Championship's final play-off spot.

A point at Crystal Palace in the final game of the season on Saturday would be enough for Cardiff.

The Bluebirds occupy the final play-off place in sixth - two points ahead of Middlesbrough, who travel to Watford.

"It's all in Cardiff's hands," said 33-year-old Campbell.

"However Middlesbrough can put the pressure on them and make them look over their shoulder. Anything can happen in football and Middlesbrough need to be ready."

Should Cardiff lose at Selhurst Park, and Middlesbrough beat Watford, it would be Tony Mowbray's side making the play-offs at the expense of the Bluebirds.

"I'm sure Cardiff can do it as I'm sure Middlesbrough can go and win the game at Watford as well. They're both on a good run of form," added former Boro and Cardiff striker Campbell.

"It's a Catch 22 situation for myself as I follow both teams and it would be nice to get them both in the play-offs and maybe the play-off final.

"But that's not going to be the case unfortunately and one of them is going to miss out on Saturday.

"Hopefully whoever finishes in the play-offs out of the two teams will go through to the Premier League. It's going to be exciting and nervous as well.

"If Cardiff can go to Crystal Palace on Saturday and get the result that they need they're going to go into the play-offs confident.

"Whoever they play I'm sure they'll give their best and it will be good enough in the play-offs."

Campbell initially joined Cardiff on loan from home town club Middlesbrough in 2002 before he later moved to south Wales on a permanent deal.

It was Campbell's extra-time winner against Queens Park Rangers in the Division Two play-off final at the Millennium Stadium in 2003 that secured Cardiff's spot in the Championship.

"It was the pinnacle of my career," added Campbell. "You don't get many bigger games than play-off finals.

"To be able to be involved in one and score the winner in one was fantastic. It was a dream come true scenario.

"Hopefully someone on 19 May can do it for Middlesbrough or Cardiff and be the hero themselves that day and get them in the Premier League."