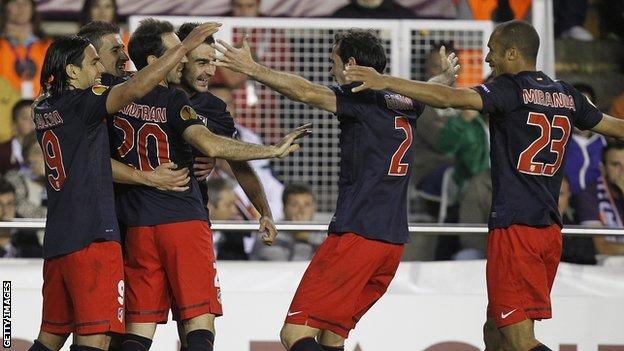 Valencia duo Sofiane Feghouli and Sergio Canales were denied by Atletico keeper Thibaut Courtois as they tried to erode the 4-2 first-leg deficit.

But Adrian Lopez chested down and half-volleyed in for Atletico to take the sting out of Valencia's challenge.

A late confrontation marred the match as Atletico's Tiago was red-carded for apparently slapping Roberto Soldado.

Atletico, now preparing for their second Europa League final in three years, beat Valencia in the last eight on the way to victory in the tournament in 2010.

Ultimately, it was Atletico's stirring first-leg performance, which they won 4-2, and superior finishing in front of goal which won them the tie as they gave their rivals too much to do in the return leg.

Valencia thought they had been given a lifeline courtesy of Ricardo Costa's 94th minute first-leg goal after being thoroughly outplayed.

They hoped the header would give them the impetus to turn the tie around, especially with the Mestalla crowd behind them.

Valencia certainly piled on the pressure as they gave little respite to their visitors after quickly building up a head of steam.

Unlike the first leg, the Mestalla outfit showed a dynamism and desire as Atletico clung on to their advantage thanks to on-loan Chelsea keeper Thibaut Courtois.

The 19-year-old Belgian dived low to his left to keep out a deflected Feghouli strike and kept out the rebounded shot from Jonas.

Soon afterwards, he watched Soldado volley high on the stretch from an Antonio Barragan cross.

The busy Courtois fended away a Sergio Canales angled drive before Atletico threatened to make Valencia pay for not turning their pressure into goals.

Arda Turan surged forward and crossed for Falcao, whose eyes opened up at a chance that quickly disappeared as he was narrowly beaten to the ball by Valencia keeper Diego Alves.

Atletico's defending was more assured after the break and Lopez struck a superb sweet strike into the top corner to deflate the home side.

The goal secured a 10th successive win in Europa League competition for Atletico but there was an negative note with Tiago's dismissal.

The ex-Chelsea midfielder appeared to have been unfairly punished for handball to give Valencia a penalty, which was the pre-cursor to an ugly melee between the two teams.

Tiago became embroiled in an altercation with Soldado and appeared to slap the Valencia striker as the Atletico midfielder lost his temper.

After the dust had settled, there was no spot-kick and Tiago was given his marching orders meaning he will miss the 9 May final in Bucharest, Romania.

Atletico Madrid coach Diego Simeone: "They had control of the game and pressed us, but we made a tactical change and in the second half we didn't have many problems.

"As the game wore on spaces opened up and that's when Adrian scored his great goal."