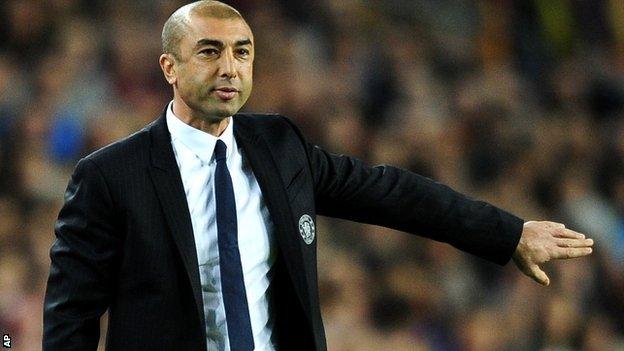 Roberto di Matteo has emerged as the leading contender to become the next permanent Chelsea manager.

Senior figures at Stamford Bridge are increasingly of the belief that the Italian is the man to succeed Andre Villas-Boas.

Several senior players are pushing Di Matteo's case, after just one defeat in his 15 games in charge of the Blues.

However, Chelsea owner Roman Abramovich will not make a final decision until the end of the season.

Technical director Michael Emenalo, who is overseeing the recruitment process, has already interviewed Di Matteo for the post, the Italian having guided Chelsea to the Champions League and FA Cup finals.

It has also emerged that the 41-year-old has been asked to make preparations for next season and help plan the club's pre-season tour of the United States, while Abramovich has promised Di Matteo a £750,000 bonus if he wins the Champions League.

Chelsea midfielder Frank Lampard is among those backing Di Matteo. "I can't speak highly enough of him. Look at the record - it's not coincidence," Lampard said.

"He's created an atmosphere, a spirit and determination. What he's done in bringing it together and getting a result like this [the victory over Barcelona], and the results we've had before, is amazing."

The fluidity of the decision-making process at Stamford Bridge means nothing is guaranteed, however.

While Abramovich has been impressed by the way Di Matteo has gently shepherded a powerful, experienced squad through to the end of the season, he knows that is a very different task from the rebuilding that must still be done this summer.

Pep Guardiola has always been Abramovich's first choice, but although the Barcelona coach harbours an ambition to manage in England, he is understood to have reservations about taking over at Chelsea.

The 41-year-old is considering taking a sabbatical from management at the end of what has been a tortuous season but will hold talks with Barcelona president Sandro Rosell before deciding whether to sign a new one-year contract.

Contact has also been made with representatives of Mourinho in recent weeks. The Portuguese, who has repaired his relationship with Abramovich since leaving Stamford Bridge, is understood to feel he has "unfinished business" in England.

But he will only consider returning to west London if he is granted total authority on all football decisions this time, a concession Abramovich has never made before.

Chelsea are reluctant to comment on the process, with chief executive Ron Gourlay refusing to "get drawn" into speculation over Di Matteo's future.

"We said we'd sit down at the end of the season. That's exactly what we're going to do," said Gourlay.

"I don't want to add any pressure on anybody at the club.

"There is enough pressure on us as it is."

Emenalo will continue to make enquiries before presenting his recommendations to Abramovich with Di Matteo in pole position.