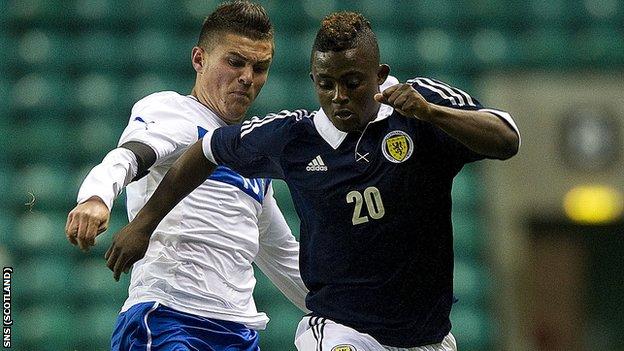 Islam Feruz became Scotland's youngest Under-21 international as Italy ran out comprehensive winners in a friendly at Easter Road.

The Chelsea forward, aged 16 years and 197 days, appeared on the hour but had a limited impact on a one-sided game.

Gary Mackay-Steven levelled after Alessandro Florenzi headed Italy into an early lead but Ciro Immobile tucked the visitors ahead again on 55 minutes.

Lorenzo Insigne and Samuele Longo then added to the visitors' tally.

Somalia-born Feruz was one of seven debutants as manager Billy Stark elected to experiment with team selection against top quality opposition in preparation for next month's European Championship qualifier with Bulgaria.

Scotland were behind from the visitors' first attack as Giuliuo Donati's right-wing cross found an unmarked Florenzi to head beyond Mark Ridgers.

Ridgers reacted well to save with his feet from Immobile before Scotland's first strike on goal came after 22 minutes when Scott Allan shot straight at Simone Colombi from 25 yards.

Ridgers spread himself well to save from Immobile twice either side of a left-footed Mackay-Steven shot which hit the post.

An equaliser soon followed as Johnny Russell reacted to a ricochet off an Italian arm and made his way to the by-line before crossing for Dundee United team-mate Mackay-Steven to tap in.

Russell forced Simone Colombi into a save and Immobile volleyed over as the half ended level.

Grant Adam was one of three half-time replacements, but his involvement lasted less than a minute as he was caught by Marco Crimi before departing after lengthy treatment.

Rochdale's Matthew Edwards then became Scotland's third goalkeeper of the evening and his first task was to pick the ball out of the net as Immobile ghosted through the middle and stroked in a neat finish.

Edwards' goal was under continual pressure and Sansone hit the bar with a strike from wide on the right.

A Rhys McCabe free-kick was repelled by Italy substitute goalkeeper Carlo Pinsoglio as Scotland briefly threatened before Insigne found the top corner with a free kick following a Ross Perry foul on the edge of the box.

Feruz found space for a shot which Pinsoglio parried wide before Scotland conceded a late fourth when Longo netted.