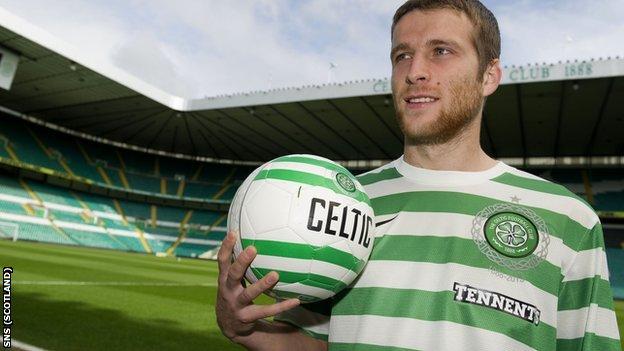 Celtic's Adam Matthews believes the absence of Rangers from the Scottish Premier League would not hinder his club's pursuit of players.

And the Ibrox club's manager told the Rangers website that starting again in the Scottish Third Division may be a realistic option for the club.

"Even if Rangers aren't in the SPL, Celtic will still be able to sign quality players," said Matthews.

"Celtic sells itself. The size of the club and its history makes players attracted to it.

"It is a great club to be at. It is a massive club with a huge fan base and if you want to win trophies this is the club to be at.

"That's why I came here and hopefully I can do that.

"So, even if Rangers aren't in the SPL, Celtic will still be able to sign quality players."

A 12-month transfer ban has been handed to Rangers following a hearing into alleged breaches of Scottish FA rules and there could be more punitive measures taken against the Ibrox club following an SPL investigation into how players were paid in the previous decade.

While the Wales full-back has no concerns over Celtic's attractiveness to players, he did admit the game in Scotland would suffer a "massive blow" if Rangers departed the top tier.

"Obviously Rangers are a great team and there is a great atmosphere when we play against them," said the 20-year-old.

"But if Rangers do have to go into the Third Division then we have to live with that and we have to keep doing our job."

Celtic's SPL title triumph, which ended Rangers' run of three-in-a-row, was secured earlier this month and Neil Lennon's side host their Glasgow rivals in Sunday's final Old Firm fixture of the season.

The previous three derbies this term have ended in home victories.

"The two times we've played at Ibrox this season, we didn't do ourselves justice so we are looking to put that right on Sunday and get a positive result," added Matthews.