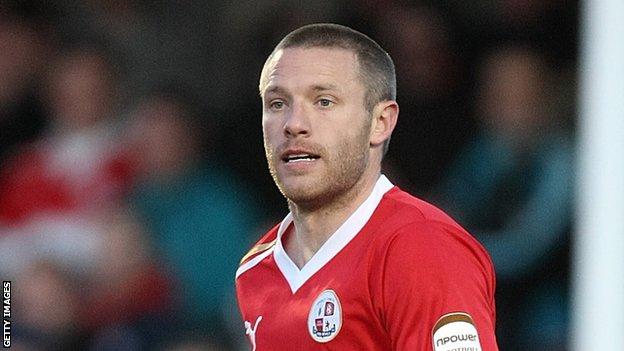 Crawley Town striker Gary Alexander believes the side are good enough to compete in League One.

The Reds will clinch automatic promotion this weekend if they beat Hereford and Torquay lose to Crewe.

He told BBC Sussex: "There's a winning mentality here and we've got a great chance to get a double promotion, which is unbelievable.

"There can be improvements but I'm sure if we go up we've got enough to build a steady ship and challenge."

The 32-year-old added: "Hopefully we can get six points in our next two games and so we don't have to worry about other results."

Hereford could be relegated if results go against them this weekend, and Alexander believes he and his team-mates must keep their focus to have a chance of sealing a top-three finish.

"They're fighting for their lives so it's not going to be easy," Alexander continued.

"We'll give Hereford all the credit they deserve but we want promotion so we'll be just as hungry as them.

"We've got experience in the dressing room and hopefully we can keep everyone chilled, go out and get a result."

Meanwhile Alexander has praised the impact Steve Coppell has had at the club since the former Reading and Brighton boss was appointed as director of football earlier this month.

"The words Steve gives us in the dressing room fill us with confidence," he said.

"It's been a fantastic help having such a big name. It's a boost to have someone of his calibre come in and help out."