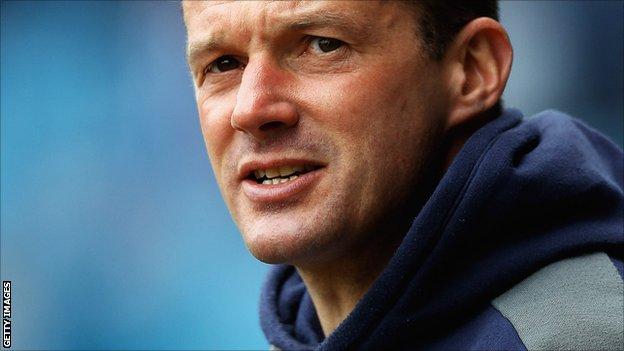 Graham Westley has criticised his Preston North End squad, claiming they have "not got a clue what it takes to get success".

Westley left Stevenage for Deepdale in January and has won just three of his 19 matches in charge of Preston, who are currently 15th in League One.

"Everybody wants success and the key is to know what it takes to get success," he told BBC Radio Lancashire.

"This playing squad hasn't got a clue what it takes to get success."

Westley, 44, added: "Every day I see standards that show me they haven't got a clue what winning is all about. That's going to be a thing of the past.

"We're going to see people raising the bar every day they come to work, people who are enthusiastic and privileged to be a part of what they're part of, and fighting with every ounce of sweat and blood in their body to make sure that we're a success."

Preston, who were relegated from the Championship last season, with the club 10th in the table.

Since Westley's arrival, the Lilywhites have won three, drawn nine and lost seven of their 19 league matches.

At the start of April, Westley accused four of his players of leaking team news and tactics to Sheffield Wednesday before an eventual 2-0 defeat at Hillsborough.

Westley, who won successive promotions from the Blue Square Bet Premier to League One with Stevenage, said he has been shocked by the "mediocrity" of standards at the club.

"It's been probably the most frustrating period of my entire managerial career," he continued. "I've never been used to winning so few games and I've never had to show so much compromise with a squad in my life.

"If I hadn't been as tolerant as I've been, our results wouldn't have gone in the slightly positive direction they've gone in.

"If they'd have seen the real me, we probably would have had a big fall-out and there could have been a real problem at the club.

"I've had to tread carefully around some of the most mediocre standards I've ever seen in my life.

"Those days are going to be behind us. We're going to be able to wipe the slate clean and do things in a professional, disciplined, organised, together and winning way.

"The nonsense will stop and I can't wait for it to stop because it's been a very difficult period.

"People don't know the half of it. If they did, I'm sure a few eyes would pop out of their heads."