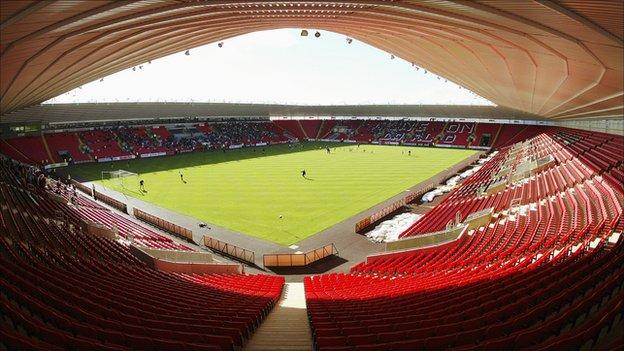 Darlington have moved closer to being taken out of administration after positive talks between the DFC 1883 group and former chairman Raj Singh.

Interim chairman Denis Pinnegar reached an agreement with Singh that should lead to completion of a proposed Company Voluntary Agreement.

A meeting on 4 May will see all creditors vote on the proposal.

The Football Conference gave the club until 9 June to pay creditors or complete the CVA to avoid demotion.

What is a CVA?

Former chairman Singh remains the major football creditor of the football club, and his approval is essential to any proposed move.

Failing to secure the CVA would have a dramatic impact on the club, following their relegation to Blue Square Bet North this season.

Compulsory demotion by the Conference would see the Quakers slip down two steps of the pyramid, into the Northern League set-up.

The threat of liquidation has hung over the football club on several occasions this season, following the decision to place the business in administration in January.

However funds generated by the Darlington FC Rescue Group to stave off the immediate threat of liquidation, and subsequently the share issue set up by DFC 1883 Limited have handed the club a lifeline.