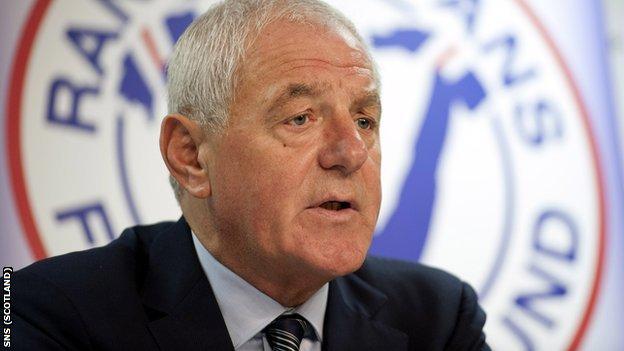 Former Rangers manager Walter Smith believes a 12-month transfer ban imposed on the Ibrox club could result in them being relegated.

Smith fears the club are yet to come through the worst of their problems.

Rangers entered administration in February and the squad agreed temporary wage cuts and release clauses, meaning they could leave in the summer.

"With no way to replace them, Rangers could effectively be playing a team of under-18 players," said Smith.

"In that situation, relegation would face the club.

"Despite all the joy that a lot of people might be taking at the situation that Rangers are in, no-one - especially in the SPL - wants to see Rangers leave with the support they carry and the amount of money they bring to the league itself.

"The sanctions they have given would, in my mind, put them in danger of relegation and every club in the league would suffer then.

"I don't think we've seen the worst because if the sanctions that were imposed take place, and there are no new owners at the club, then there is obviously worse to come."

Ally McCoist, Smith's successor and former assistant, claimed the inability to replace players could ultimately "kill" Rangers and was keen to know the identity of the three-man Scottish FA panel that made the decision.

But McCoist has since stated his "disgust" at threats made to the three men after they were named on internet sites, which has prompted a police investigation.

"Never mind the fact that he has a job as manager to do, he has been a supporter since he was a boy. He doesn't like to see what's happening at his club.

"Add to that the frustrations that he will feel in his first year as a manager and having to handle circumstances that very few of us, regardless of how experienced we are, have to handle.

"There will be a lot of frustration there and it came out the other day - and came out quite rightly, in my opinion.

"But there was a point to what he was saying and I don't think anyone - especially if you are a Rangers supporter - would disagree with what he said.

"I think he has handled himself extremely well. Nobody has been able to help him - how can you help somebody when you have never been in that circumstance yourself?

"It's his career that's on the line as well."

Meanwhile, former Rangers captain Sandy Jardine, who works behind the scenes at Ibrox, revealed supporters groups will meet on Saturday to discuss implementing sanctions against other clubs.

"We are going to have a meeting with all the delegates from the whole of Britain, and some of them will be flying in from abroad," said Jardine.

"Out of that, the supporters will take sanctions against clubs which we deem to have been unfair to ourselves.

"I'm not going to go into the actual details but we will probably announce that after the meeting with the supporters clubs."