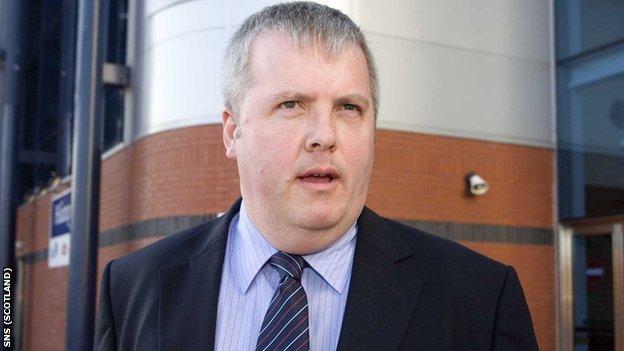 Eric Drysdale admits the reaction to his part in the Scottish FA panel decision to ban Rangers from transfers for a year has come as "a shock".

The Raith Rovers director and two other judicial panel members have been advised by police after receiving threats relating to Rangers' ban.

"I've been principally concerned for my family," said Drysdale, who wishes to continue as a judicial panel member.

"The experience was not what I was expecting when I joined the panel."

Member clubs voted in changes to the SFA's disciplinary procedures, which included the implementation of the semi-autonomous judicial panel, which is made up of volunteers.

"I wanted to put something back into Scottish football and the level of problems that we've experienced in the last day or so has taken me by surprise," said Drysdale.

"There have been calls to Stark's Park and just general emails and that kind of thing. I don't want to go into the specifics of anything that's been said but obviously I've been receiving advice from the police on how to deal with that.

"I've been involved in football for a number of years and I'm quite used to that side of things but this is a different level entirely, just a different experience.

"Some members of the judicial panel will be watching this and thinking 'what have I got myself involved in?'. I've certainly questioned it myself over the last 48 hours.

"Somebody's got to do it but there will be people who don't want to subject themselves, and more particularly their families, to this kind of pressure and I would perfectly understand that.

"On the basis that this is an unusual set of events, I would like to continue if I possibly can."

The BBC initially chose not to identify the three panel members but Drysdale has since agreed to being named and insists he would "have no difficulty" with a public hearing instead of a private procedure and suggests the timing of judicial panel announcements should be changed.

"The process is very robust but a lesson to be learned from it might be that when decisions are reached that we delay public announcement of that until we also give the reasons for the decisions reached," he said.

"If people can read that all in one rather than having to wait this few days then perhaps they form a more balanced view of the process."

Following the announcement of the transfer embargo and fines for Rangers and owner Craig Whyte over rule breaches, Rangers manager Ally McCoist questioned who had made the decision but later expressed his "disgust" at threats made towards the panel members.

Drysdale insists "a lot of evidence from a number of people" was considered during the hearing and said of McCoist's initial call for identification: "I don't think it helped.

"I was disappointed at what was said in that interview with Ally. I understand the huge pressure he must be under every day of his life and I have a lot of sympathy for that.

"Nobody involved in this process has an axe to grind at all against Rangers. It was purely a case of coming to a judgement based on the evidence that we'd heard.

"I stand by decisions that were reached. We looked at the options available to us and the decision of the panel was that this was an appropriate level of sanction.

"That was my view and that's what I was asked to give, my view."