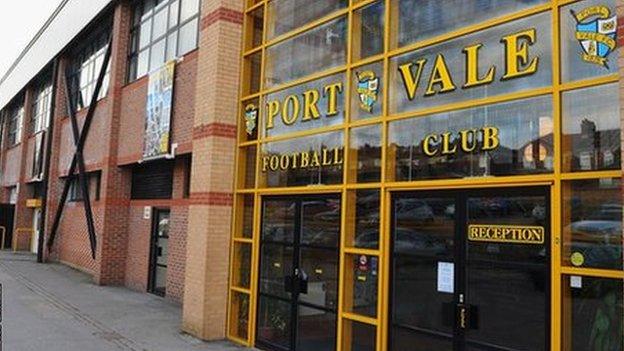 Port Vale hope to have their takeover finalised and be out of administration by June - in good time to start making proper plans for next season.

BBC Radio Stoke understands the administrators' proposals, which have been agreed by 86% of Vale's creditors, have been approved.

And that would free Vale boss Micky Adams to rebuild his League Two squad.

"Now the manager can build for next year. It's music to his ears," said midfielder Anthony Griffith.

"We got informed that a new owner had taken over a couple of weeks back.

"But there's still a long way to go. It's just one of those small steps to getting out of administration. And it's good news for everyone that surrounds the club," he told BBC Radio Stoke.

There was still a chance this year even when we had the 10 points taken off us, as we still had the spirit in the camp

"I'd like to see this club push on and get out of this league," added Griffith, one of a large number of Vale players whose current contracts are up in the summer.

"We've had opportunities the last two years and there was still a chance this year even when we had the 10 points taken off us, as we still had the spirit in the camp."

And although their final two games are both tough ones, against champions elect Swindon Two and play-off chasing Oxford United, they still have the incentive of trying to win both matches in an attempt to demonstrate their automatic 10-point deduction in March cost them promotion.

But, for the moment, although there still remain a few bridges to cross, after Stoke-on-Trent City Council approved the plans on Wednesday night, the club is at last moving in the right direction again.

The city council have already confirmed that they expect to write off more than £1m of a £1.86m loan to Vale after creditors were told how much they stand to get back if the preferred bidder to take over, Keith Ryder, succeeds.

Manager Adams would then have the immediate task of agreeing new deals with the majority of his current squad.

As thing stand, midfielder Doug Loft and defenders Gareth Owen and Adam Yates would be the only three players still in contract after 30 June.