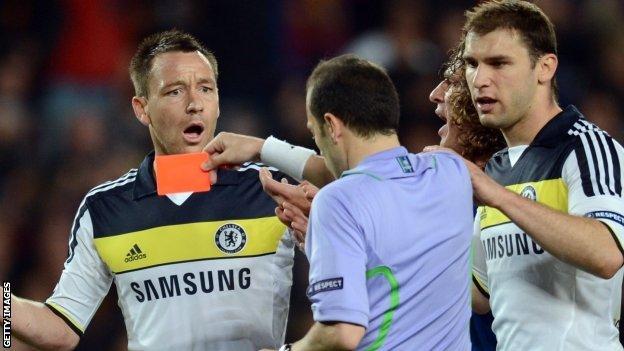 Suspended Chelsea captain John Terry would be allowed to lift the Champions League trophy if his side defeat Bayern Munich in the final on 19 May, Uefa has confirmed to BBC Sport.

Terry is banned after being sent off for violent conduct in the semi-final second leg against Barcelona.

Uefa's rules only prevent suspended players from sitting on the bench.

The governing body also said it will not change its rules to let six other suspended players feature.

It means Terry will have to watch the final from the stands, along with Raul Meireles, Ramires and Branislav Ivanovic, all of whom are banned after being booked against Barcelona.

Bayern's Luiz Gustavo, David Alaba and Holger Badstuber will also miss out after being shown yellow cards in Wednesday's win over Real Madrid.

Uefa said the regulations in place when the competition started must stand for the game in Munich, with any future changes required to go through a lengthy committee process before being ratified.

At Euro 2012, only players sent off in the quarter-final or semi-final will be banned from the final in Kiev, and international players' union FIFPro had called on Uefa to show leniency.

In 1999, when Manchester United won the Champions League, captain Roy Keane was suspended for the final. The men who lifted the trophy was stand-in skipper Peter Schmeichel, playing in his final game for the club, and Sir Alex Ferguson

Simon Barker, a spokesman for FIFPro, said: "Anybody committing a serious offence in the semi-final should be awarded a red card and miss the final, but the offences that result in a yellow card do not justify the serious punishment of missing the match of your life.

"Some people say this will give players the licence to kick all and sundry during the semi-final, but that is utter nonsense.

"Any serious offence will result in a red card and that still means exclusion from the final.

"I am against this rule that two yellow cards and you miss the final because there are not many times in your life you get to the final and it's time to think about this."

Fifa changed its rules for the 2010 World Cup to provide an amnesty after the quarter-finals to ensure no player could miss the final through a booking in the last four. If Uefa was to follow suit, the Club Competitions Committee would have to propose the rule change.

Nicky Butt, who played in Manchester United's 1999 Champions League final win over Bayern Munich because of suspensions to Paul Scholes and Roy Keane, has warned against a change, though.

"There are some cynical yellow cards that deserve a ban," he told BBC Sport.

"If a lad is running through in his own half and he is checked - that's a cynical yellow card. I think they should pick a committee of ex-players around Europe who have been in that situation who can tell.

"If players are missing the ball by half a second and they are going to miss the biggest games of their lives then that is very harsh.

"There are some yellow cards that should stand as a suspension but the majority of them could be looked at by a panel."