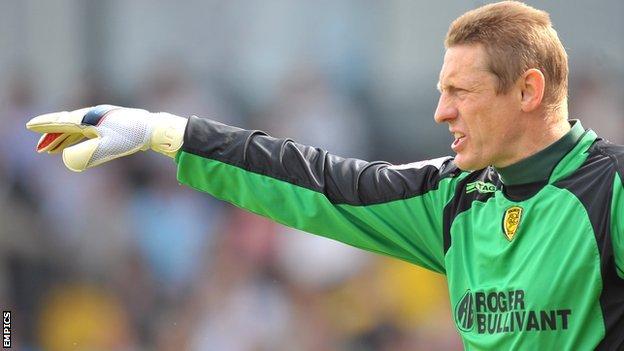 Veteran Burton Albion goalkeeper Kevin Poole will retire at the end of the season after a 32-year career.

He has made 123 appearances since joining the Brewers in 2006, is also goalkeeping coach and has recently been assisting caretaker boss Gary Rowett.

"I've had a great career and 32 years is enough," he told BBC Radio Derby.

"It's taken me a while to decide. But the last couple of months it's taken me a long time to recover from games I have played in and I think it's the right decision."

Poole, who came through the youth ranks at Aston Villa, said he has some great memories from a career which spans four decades.

"I was a big Villa fan as a kid and I used to go and watch them, so to make my debut for them was unbelievable," he said.

"I had good times over the years, a good couple of years at Middlesbrough, good times at Leicester playing in the play-offs at Wembley.

"I've really enjoyed my six years here. I only came for a couple of games!"

Poole's last senior appearance for Burton Albion was in October 2010 in the Johnstone's Paint Trophy against Rotherham United.

And the Bromsgrove-born keeper hopes to play one final game in either of Burton's remaining two fixtures this season.

He said: "I will be on the bench and if things are going quite well I might get on for five minutes. But I don't know, it depends."

But he hopes his association with the Brewers will not come to an end whatever transpires.

"Hopefully, things will work out and I would love to stay on as goalkeeping coach," he added.