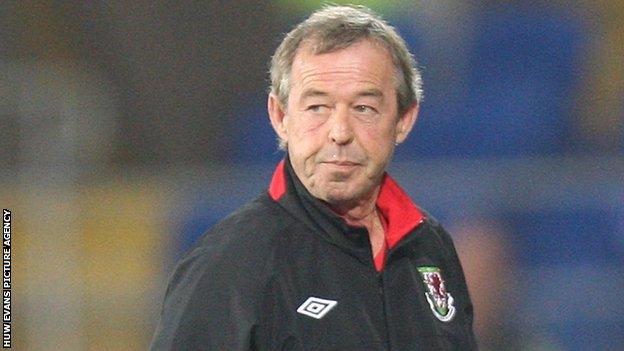 The Football Association of Wales have confirmed Wales intermediate manager Brian Flynn will not be continuing in the role beyond his current contract.

Flynn has been in charge of Wales' national youth teams, including the Under-21s, since 2004.

The ex-Burnley player spent a two-game caretaker spell in charge of the senior side after John Toshack left in 2010.

The former Wrexham and Swansea manager's contract expires at the end of May.

"The Association would like to thank Brian and acknowledge the tremendous work and effort he has undertaken on behalf of Welsh football over the years," the FAW said in a statement.

"He played a huge and important role in the development of the likes of Gareth Bale, Aaron Ramsey, Joe Allen and Wayne Hennessey."

The 56-year-old has been responsible for Wales' Under-17s, Under-19s and Under-21s, assisted by former internationals Alan Curtis and David Williams.

With Flynn in temporary charge, Wales lost the two qualifiers - at home to Bulgaria and away in Switzerland.

The Port Talbot-born manager, who won 66 caps for Wales, was interviewed by the FAW for the permanent role before they decided to appoint Gary Speed.

They almost qualified for the 2009 European Under-21 Championships before narrowly losing to eventual runners-up England in a two-legged play-off.

And Flynn's side missed out on a place in the 2011 European Under-21 Championship play-offs after they lost to Italy in their final group game.

In the current Euro 2013 qualifying campaign, Wales are joint leaders of Group Three with the Cezch Republic although their rivals have two games in hand.

Wales complete their group matches at home to Armenia in August and an away game against the Czech Republic in September.