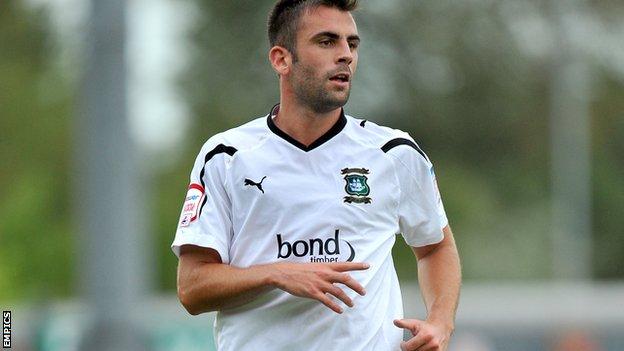 Plymouth Argyle captain Simon Walton will be staying at Home Park for at least a further 12 months.

The 24-year-old, who was the club's record signing when he joined from QPR in the summer of 2008, would have been a free agent at the end of the season.

But it has emerged that Walton agreed a new deal while the club was going through financial problems last autumn.

"He signed a new deal during the takeover to benefit the club," boss Carl Fletcher told BBC Radio Devon.

In the previous three seasons, Walton only played 21 times for Argyle after having issues with Paul Sturrock, while Peter Reid expected him to leave in the summer of 2010 after spending the season on loan at Crewe, where he described his time at Argyle as a 'nightmare'.

But this season Walton has been a regular in the Argyle line-up, playing 45 matches as he has thrived under the leadership of Fletcher and assistant Romain Larrieu.

"He agreed terms on a deal when the club was being taken over to help and aid the club in getting it out of administration," Fletcher added.

Walton is one of only six members of the squad remaining from that which appeared in the Championship in 2009-10.

Onismor Bhasera, Fletcher and Larrieu also played in the club's final season in English football's second tier, while Curtis Nelson and reserve goalkeeper Ollie Chenoweth were in the squad, but did not play.