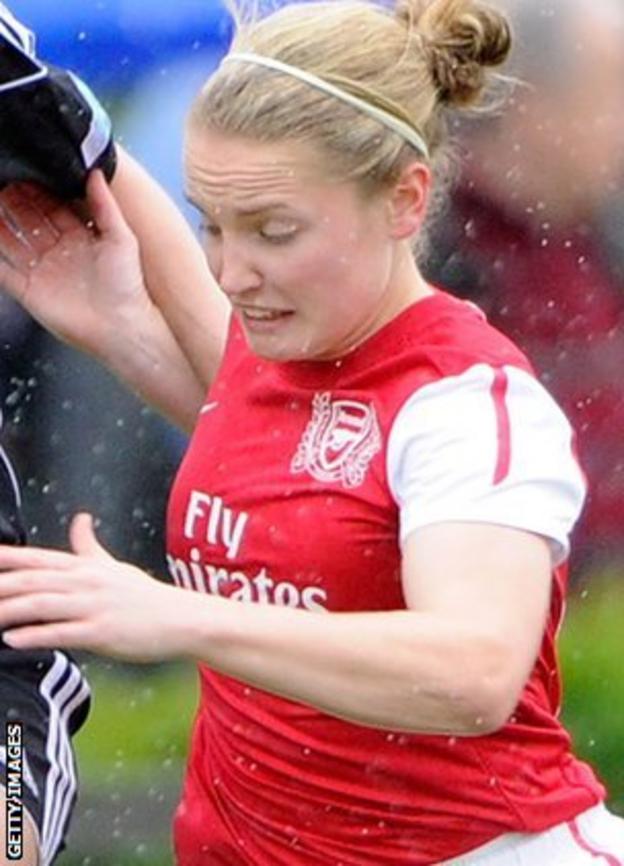 Kim Little scored twice and Katie Chapman was also on target as Arsenal went top of the Women's Super League with a 3-1 win against Chelsea.

Arsenal had been kept at bay in the first half by Blues goalkeeper Carly Telford, but after she had to be replaced, Little opened the scoring.

However, Little's goal deep into injury time sealed it for Arsenal.

The dress rehearsal for Sunday's FA Cup semi-final between the two clubs was watched by a crowd of 5,052 at Emirates Stadium.

That smashed the WSL record attendance of 2,510, set at the league's inaugural game when Chelsea hosted the Gunners in April last year.

Little's second goal put a more realistic look on the scoreline after Arsenal had created practically all of the game's good chances.

They would have won by a wider margin but for Telford, whose best save of many was a tremendous double stop in the 17th minute.

First she blocked Chapman's close-range header, then, a split-second later, she smothered striker Danielle Carter's shot from the rebound.

Telford pulled off another fine save in the 27th minute, diving full length to keep out midfielder Little's low 15-yard drive.

Chelsea forced their way into the game in the closing stages of the first half, but two minutes after the break they went behind.

Little raced through the defence to cheekily dink a shot over the advancing Sarah Quantrill, Telford's replacement, who carried no blame for the goal.

Two minutes later the keeper made a fine save from midfielder Steph Houghton, but she was well beaten by Chapman's glancing header from a Little cross.

The Blues pulled a goal back when Longhurst cut in from the left to lift a 20-yard lob over goalkeeper Emma Byrne.

The visitors then had their best spell of the game as they looked for an equaliser, but in the closing stages it was Arsenal who went closest to scoring again.

Little, Chapman and substitute Gemma Davison all had chances before Little wrapped up victory with a shot from 12 yards three minutes into stoppage time.

Victory was well deserved by the Gunners, who will now be clear favourites to win Sunday's FA Cup semi-final.