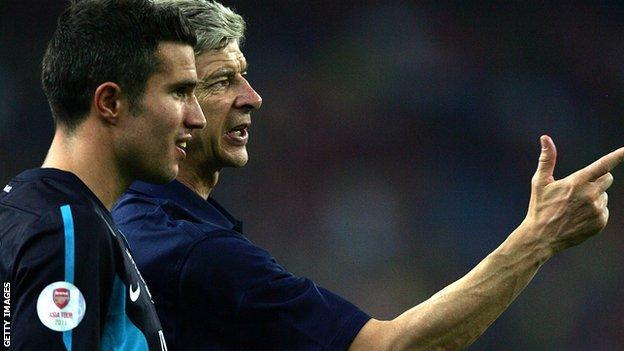 Arsenal are yet to propose a date for contract talks with captain Robin van Persie as he considers delaying any decision on his future until after Euro 2012, BBC Sport has learned.

The Gunners insist the situation will be addressed in the four days between the season ending and Van Persie joining up with the Netherlands squad.

I am confident [he will stay] for two reasons. First of all I want to convince him to stay here and to extend his contract. Secondly he is not free at the end of this season, he has one year of his contract left anyway

But no meeting is scheduled and Van Persie may see how Arsenal act in the summer before committing.

He has a year left on his current deal.

Gunners boss Arsene Wenger stated in March that the 28-year-old would not be leaving and on Friday he reiterated his desire to keep him.

"I am confident [he will stay] for two reasons," said Wenger. "First of all I want to convince him to stay here and to extend his contract.

"Secondly he is not free at the end of this season - he has one year of his contract left anyway."

Van Persie has consistently maintained he will not open dialogue until the campaign is over.

Arsenal travel to Stoke on Saturday before hosting Norwich on 5 May and finishing at West Brom on 13 May.

Van Persie is then due to report for a pre-Euro 2012 training camp with the Netherlands in Switzerland on 17 May.

Given the short time frame, it is understood he is now open to the idea of playing in the tournament before deciding on his Arsenal future.

That would give him time to assess factors such as the club's transfer market activity and decide whether he wants to extend his eight-year stay.

Additionally, if Arsenal finish fourth they will not know until 19 May - when Chelsea face Bayern Munch in the Champions League final - which European competition they will contest next season.

But Arsenal are keen to avoid a repeat of last summer, when the protracted departures of midfielders Cesc Fabregas and Samir Nasri disrupted their start to the campaign.

Van Persie, who signed from Feyenoord in 2004, has scored 34 goals in 45 matches this season and was named player of the year by the Professional Footballers' Association and Football Writers' Association.