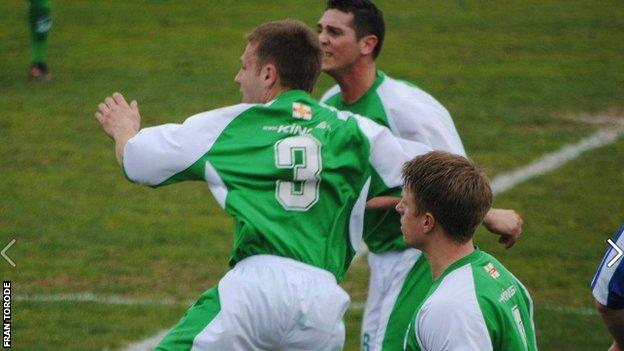 The Green Lions face Spelthorne Sports in their final league game of the season having secured the Combined Counties League Division One title.

The side have also made the league's Premier Cup final, beating champions Guildford City in the semi-finals.

"I'm confident we've got the ability to survive in the Ryman," Vance told BBC South West.

"But I really believe our biggest problem is to get promoted out of the Combined Counties Premier League because only one team goes up and three or four teams have playing budgets and experience of that football that we of course haven't.

"If we do get out of the division I would fancy our chances of surviving in the Ryman."

The Isthmian League, known by the name of sponsors Ryman, is one of three feeder competitions for the Football Conference, along with the Southern League and Northern Premier League.

It takes in teams from London and the south east of England and has two feeder divisions into its Premier League, which in turn feed into the Blue Square Bet South.

But Vance says he is committed to the side being made up solely of players who live and work in Guernsey.

"We've got a lot of talent over here," he said.

"But I certainly don't want to be in a position where we fly over to Gatwick and meet seven or eight players at the airport who don't train with us.

"For the foreseeable future I see it as a Guernsey side because I believe the talent's there."

And that squad have a chance to celebrate a first title in their inaugural season on Saturday.

"It's a game they all want to play in because it's the last game in front of the crowd and we get the trophy," Vance said.

"To get four-figure crowds at every home game is incredible.

"Hopefully next year, in the league above, more people will come and support us."