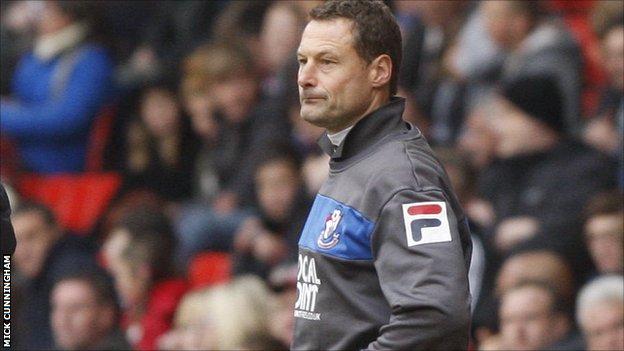 Bournemouth caretaker boss Paul Groves is closing in on the job permanently.

Chairman Eddie Mitchell said last week Groves is his preferred choice and he is scheduled to sit down next week with co-owner Maxim Demin to discuss Groves.

"I am impressed. It is very enjoyable and you look forward to trying to play the game the right way," Cooper told BBC Radio Solent.

Groves has been in charge for six games since taking over from Lee Bradbury and has won one, with three draws and two defeats.

Cooper is the second Cherries player to publicly back the former Grimsby boss with on-loan defender Miles Addison claiming the appointment of Groves full-time could convince him to sign permanently.

"If Paul Groves and Shaun Brooks (assistant manager) stay then it is something I would consider," he said on 13 April.

"I've really enjoyed my time with them so far and at AFC Bournemouth."

Last Friday, Mitchell used an interview with Hot Radio to also publicly back Groves, saying if it was solely his choice he would appoint the 46-year-old.

But Mitchell will have to agree with co-owner Demin and the pair will sit down next week to discuss Groves's future with an announcement expected at the end of the season.

Groves admitted he was flattered by Mitchell's comments but was concentrating solely on the final two games of the season.

"I think it's very complimentary from the chairman to come out and make that statement," Groves said.

"You thank him for that but, ultimately, we've got a game this weekend and another after that a week on Saturday.

"We came in and the remit was to take the team until the end of the season, that's what we've done and will continue to take the team on a game-to-game basis. We will keep working and trying to improve up until that very last day."

Meanwhile, Bournemouth has announced a profit of just over £1m for the year ending 31 July 2011.

While the club recorded an operating loss of £1.2m, player sales generated £2.3m, giving a profit of £1.1m.

However, the latest statement does not include the fees received for Anton Robinson, Danny Ings and Liam Feeney, which will figure in next year's accounts.

The last time the club recorded a profit was at the turn of the millennium.