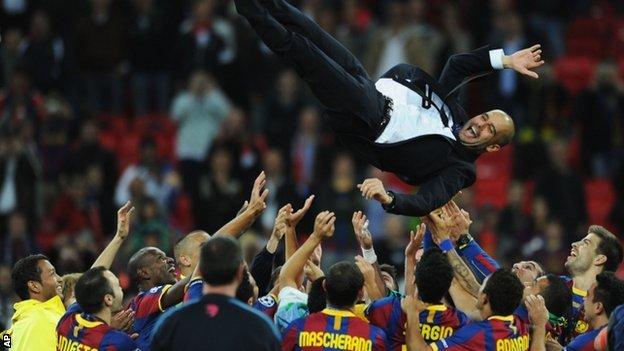 Pep Guardiola's departure as Barcelona coach, after 13 trophies, including three La Liga titles and two Champions Leagues, will sadden many beyond the club and its supporters.

Trophy number 14 may follow on 25 May in the shape of the Copa del Rey, but this is the end of an era.

Purely in terms of trophies, Johan Cruyff, who managed the side from 1988-96, is the only other Barca coach to compare to Guardiola. Yet like the influential Dutchman, the Catalan's success was about so much more than results.

Guardiola unites probably the two most glorious eras of the club's history. Firstly, he was the midfield pivot that centred Cruyff's Dream Team in the 1990s. He went on to create a team as coach to rank as one of the most thrilling to have played the game.

Almost 30 years ago, when Guardiola arrived at the fabled La Masia academy as a 13-year-old, Cruyff redeployed him as a defensive midfielder. With his visionary range of passing, Guardiola became Cruyff's muse on the pitch.

Six Spanish league titles and one European Cup later, he became boss on 17 June 2008, after a successful year in charge of Barcelona B. Most expected a back-to-basics approach under a safe pair of hands, but few imagined revolution.

By getting rid of divisive (and as it turns out, waning) dressing room figures such as Ronaldinho and Deco, he immediately imposed his authority. Later, more controversially, he did likewise with the intense personality of the brilliant Samuel Eto'o - but not before he had coaxed one more exceptional Champions League-winning season from him.

The naked eye tells us that Barcelona's play is a symphony of intuition. Yet we shouldn't be fooled by the breathtaking aesthetics. Guardiola is an obsessive, a perfectionist.

The technical relationships on the pitch are the result of years of indoctrination and feverishly practiced drills. That's exactly why the recapture of Gerard Pique from Manchester United and Cesc Fabregas from Arsenal was so important.

Pique became, to an extent, the tempo setter for Guardiola that he himself had been for Cruyff. That the pair's relationship cooled this season has been a problem for Barca.

Guardiola's belief in the academy was absolute. In 2006, three La Masia products started the Champions League final win over Arsenal in Paris. By the time Barca won the trophy back against Manchester United in Rome three years later, seven starters were youth products.

Guardiola had a strong sense of the club's lineage, but never aimed to impose his own characteristics on the team. To call him just a disciple of La Masia is to underplay his intelligence and adaptability.

Cruyff's Dream Team crumbled after the 1994 Champions League final humbling by Fabio Capello's Milan. Guardiola's key role had been marginalised in that game, crowded out by Marcel Desailly and Demetrio Albertini in midfield. He never forgot that experience.

Later in his playing career, Guardiola participated in Louis van Gaal's revival of Barca. Drawn from the same "Total Football" principles as Cruyff, the blunt Van Gaal demanded even greater selflessness from his team. Guardiola followed suit as a coach.

So, he built on the successes of Spain's Euro 2008-winning side, building around Xavi and Andres Iniesta in midfield. Yet his genius was in seeing what his side would need to do to compensate for their generally smaller statures. They would press and work as rarely seen before.

Guardiola constantly sought to innovate, and evolve, as he learned from his mistakes. The expensive Dmytro Chygrynskiy was jettisoned after struggling to adapt. Ball retention was more important than orthodox positioning, the coach decided. So Javier Mascherano and sometimes Sergio Busquets ended up playing in defence.

Like all great artists, Guardiola is like a magpie; listening, observing, and incorporating an idea here and another there. Before taking the Barca job, he spoke to some of the coaches he respected most; Juan Manuel Lillo, who he played under at Mexican club Dorados Sinaloa, and now-Athletic Bilbao boss Marcelo Bielsa.

Before the announcement of the appointment of Guardiola's assistant Tito Vilanova, Bielsa had been the early favourite to succeed Guardiola. As with any other 'outsider' not of Barcelona stock, he would have represented a huge risk.

Until Guardiola succeeds elsewhere, the question will remain - is Guardiola a standalone genius, or just a highly skilled conduit of an excellent system, like Germany's Joachim Low? His failure to fully integrate Zlatan Ibrahimovic raises doubts over his ability to bring outsiders into the bubble; and to embrace a plan B.

It has also been suggested in the Catalan press that Guardiola sensed the end of a cycle - yet doesn't have the heart to make tough decisions on players that have given him so much.

Yet his efforts will not be forgotten. As Catalan daily El Mundo Deportivo writes today, Guardiola "has given his life over to Barca for these four years." When Guardiola called Bielsa "the best coach on the planet", the Argentine replied abruptly: "I'm not Pep's master. He is the master."

That just about sums up the task his successor faces. Even if Guardiola decided to turn his sabbatical into a retirement, his Barca legacy will be felt for generations.