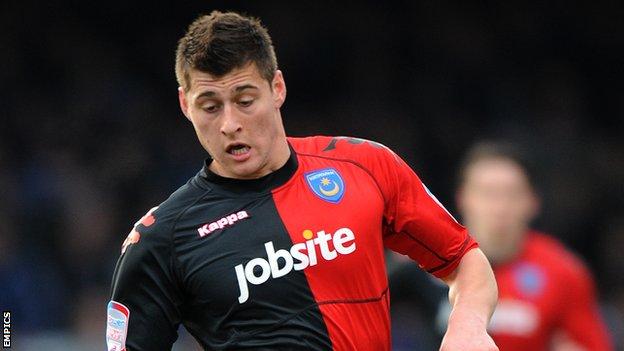 Jewell made in January.

Debt-hit Portsmouth, who were relegated to League One on Saturday, need to massively reduce their wage bill.

"Certainly Joel Ward would fit our bill. He is young, versatile and I think he wants to come here," Jewell told BBC Radio Suffolk.

Portsmouth are expected to offload a number of players this summer in a bid to keep the club alive.

And 22-year-old Ward, who can also play in midfield, and Pearce, 24, look likely to be leaving Fratton Park.

"I've had an agent call me on behalf of a couple of players there," Jewell added.

"It's no big secret we made an offer for Joel Ward. But I think Pearce is going to Leeds."

Meanwhile Jewell has expressed his belief that Lee Bowyer will go on to have a coaching career, following the announcement that the former Leeds midfielder will not be offered a new Ipswich contract.

"He still wants to play. He's got one or two people still interested in him and we wish him well," he said.

"I just feel, with the players we're trying to bring in for next season, Lee's chances will be limited.

"I think he'll have a future in the game as a coach. I believe he's got that enthusiasm and knowledge but unfortunately in terms of us it's a year too far."

Grant Leadbitter's future at Portman Road looks set to be decided before Saturday's trip to Doncaster.

The 26-year-old is out of contract in the summer and has yet to agree a new deal.

"We will find out if Grant's going to stay when the team-sheet goes in on Saturday," said Jewell.

"If he's not going to stay he won't play and I'm expecting to find that out by Friday."