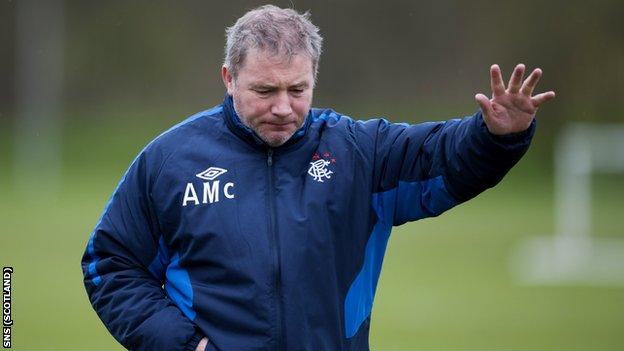 Rangers manager Ally McCoist says he has no regrets over his call for the three-man Scottish FA judiciary panel who punished the club to be named.

Police advised the panel members who were threatened after their identities were revealed.

However, McCoist said he should not have to consider potential actions of the "lunatic fringe" when voicing his opinion.

I stand by everything I've said

The names of those responsible for imposing the year-long transfer embargo were published on internet sites and the SFA said all three received "abusive and threatening communication".

McCoist had said he was disgusted by threats made to the panel and urged everyone connected with the club to focus on appealing against the sanctions in an "appropriate manner".

"Anybody with a sane brain would know that I abhor violence and would be dead against it," said McCoist.

"This lunatic fringe, who hide behind the internet, do not interest me in the slightest. I've got absolutely no time for them. I don't go on the internet and read it."

Asked whether he had any regrets over his original comments, McCoist said: "Not at all. I think a lot of people have misinterpreted my statement as some form of apology.

"It's anything but an apology. I stand by everything I've said. In fact, I was delighted to see Eric Drysdale come out and disagree with my comments.

"I respect him and I respect his decision - although I don't agree with it.

Drysdale is a director of Scottish First Division side Raith Rovers, and on Friday afternoon his club issued a statement about the threats it has received.

Vice-chairman Turnbull Hutton said: "This football club finds itself now having to contend with various threats in the form of emails and telephone calls, during the build-up to an important SFL league match.

"This club, along with every other club in the SPL and SFL, voted for change at last year's AGM.

"Part of that change involved the setting up of a panel of individuals who would give of their time to better facilitate and judge on football issues affecting the game in Scotland.

"Individuals who agreed to an involvement in that process now find themselves chased by the media, vilified by sections of the press, subjected to abuse and hate.

"If this is the consequence of participation, it is more than likely that many will wish to consider whether or not such participation is worth such a price.

"This football club remains supportive of our Director's involvement in what has turned out to be a fiasco.

"We are NOT directly involved in the process per se. Threats to our staff, our infrastructure and our reputation is something we could well do without.

"We are heartily sickened by what has happened this week.

"This board now looks to the footballing authorities to defuse the current mayhem and allow this football club - and no doubt others - to get back to business as usual."