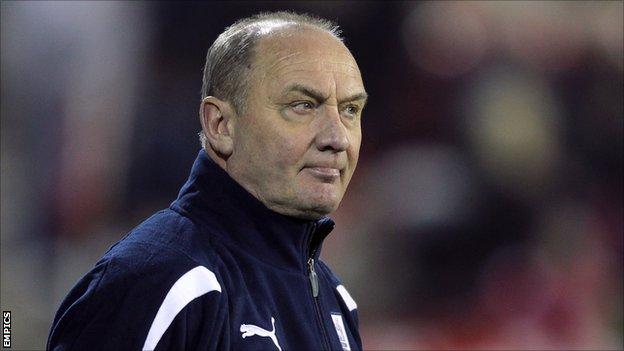 Brian Horton has left his position as manager of Macclesfield Town following their relegation from League Two.

Macclesfield Town in the Football League

Horton replaced Gary Simpson in March and was handed the task of keeping the Silkmen in the Football League.

But he failed to win any of his eight matches in charge and relegation to the Blue Square Bet Premier was confirmed with the 2-0 defeat by Burton Albion.

Assistant manager Glyn Chamberlain will take charge for the final match of the season at Southend.

Speaking after Saturday's defeat, Horton told BBC Radio Manchester that it was "highly unlikely" he would remain at the club.

"It's a sad day for me because I was at the game when they won promotion at Kettering," said the 63-year-old.

"It's highly unlikely that I'll stay with the club going into non-league. I was brought in for nine games and I didn't expect us to go down today.

"I honestly thought we'd win a game and we'd take it to the last Saturday."

Horton returned to the Moss Rose with Macclesfield on a long winless run, which now stretches back 22 league matches to 31 December.

"We need a different set of skills to be competitive in the Conference," said vice-chairman Andy Scott. "Our favoured candidate will be someone who knows the game well at that level.

"We have an excellent set-up behind the scenes, which we will think will offer an attractive proposition to an ambitious manager.

"We have some targets in mind and we hope to be able to make an early permanent appointment."