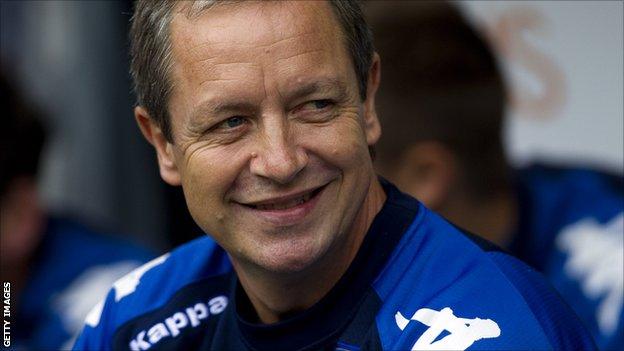 On Wednesday four people were made redundant, including club ambassador Linvoy Primus, while 30 people lost their jobs in February.

Gray has now been linked with a move to Nottingham Forest to reunite with former Pompey boss Steve Cotterill.

Pompey boss Michael Appleton admitted on Thursday it was hard seeing members of staff leave, including his trusted assistants.

"It's a difficult situation to be in because I've enjoyed working with everyone at the club," Appleton told BBC Radio Solent.

"It's not just going to be Stuart or Guy that lose their jobs, there are going to be more staff going as I'm sure you're aware of.

"It's very difficult but over the past six months it is a situation we have come to terms with."

The club are currently £58m in debt and searching for new owners. Birch said at Thursday's creditors' meeting that Pompey - who were relegated to League One last weekend - only had a 50/50 chance of survival.

Birch also revealed that the club only had enough money to last them until June, and he is now expected to make further cuts at the club - including players.

One man possibly heading out of the exit door is defender Joel Ward, who remains a target of Ipswich Town.