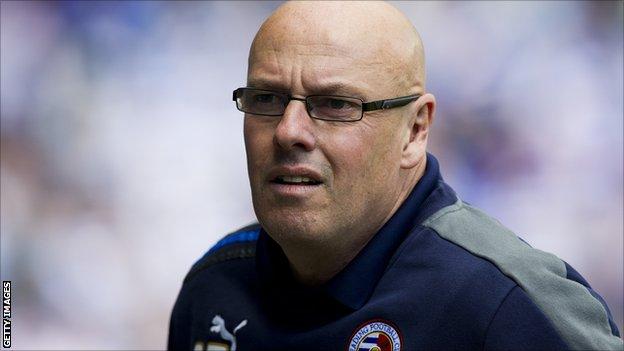 Reading manager Brian McDermott says Saturday's game against Birmingham will be a "special day" for his recently promoted side.

The Royals go to St Andrew's as champions and McDermott says they are desperate to end the season with a win.

"This is a special game for the club. We are going there as champions, we know we've won the league," McDermott told BBC Radio Berkshire.

"The philosophy is the same, we want to win but it's very special."

McDermott side will celebrate their promotion with a open-top bus parade around Reading on Sunday which will end at the Madejski Stadium.

But he says they are fully focused on Saturday's game.

"The players don't need focusing, they know they want to go there, put on a performance and get the right result," added McDermott.

"The lads have proved what type of people they are over 45 games. This is a game to be enjoyed but every time you play your reputation is on the line so we will respect that.

"We've got more than 4,000 fans there and we owe it to them. They'll have a great day. I remember going to Watford on the last day a couple of years ago and losing, it was horrible. You want a good feeling."

Reading's achievements this season are only starting to sink in and reflecting on the title triumph, McDermott said: "When we went top at Southampton I just felt it was the right time.

"We couldn't be hunted because there wasn't enough time. Southampton and West Ham had been chased down. Once we got there we just wanted to make sure we stayed there.

"(Former Reading boss) Steve Coppell said to me when you achieve something you have that glow, and I know what he means now.

"We had some people round over the weekend and I just left the league table on the telly."