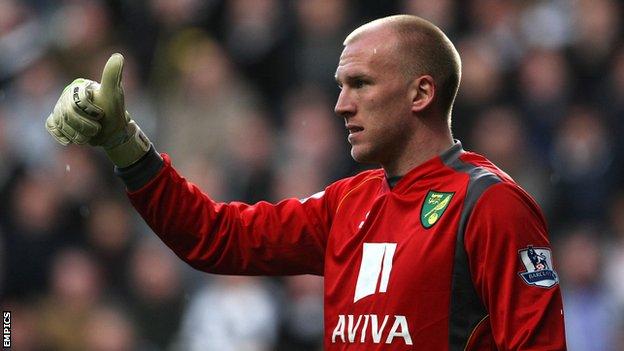 Norwich City keeper John Ruddy has claimed he and his team-mates are not yet able to call themselves Premier League players.

The Canaries have all but survived this term with a squad short on experience in the top flight.

"If we're here next season then you can start to come around to the idea of being a Premier League player," Ruddy told BBC Radio Norfolk.

"But 35 games is nothing in the Premier League," he added.

"If we do it for the next two or three seasons then definitely we're a Premier League club.

"It's very satisfying to stay in the league but you've got to repeat that for the next couple of years."

Norwich, who face Liverpool on Saturday, need just one point to mathematically guarantee their Premier League survival, but it is extremely unlikely they will be pulled into a relegation fight.

Their success this season has been partly down to the form of 25-year-old Ruddy, who has been spoken about as a potential goalkeeping option for England's European Championship campaign this summer.

"If England call me up I'll be absolutely honoured and delighted," said the former Everton shot stopper.

"It would be a very proud moment for me but it's not something I'm constantly thinking about at all.

"My biggest aim is to finish the season strongly for Norwich.

"If I do that I can go into the summer with my head held high knowing that I did all I can to keep us in the Premier League."