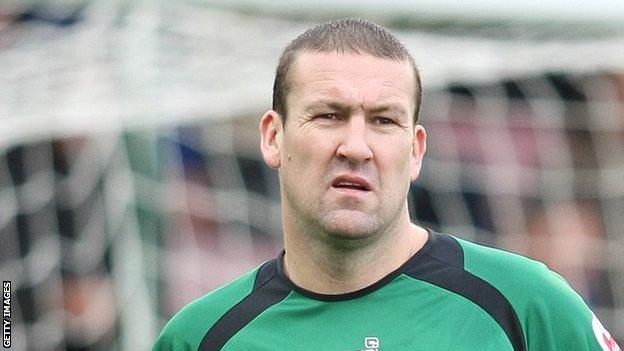 Chesterfield coach Mark Crossley believes the pressure is off his side as they battle for survival in League One.

The Spireites had looked doomed but three straight victories have lifted them to within four points of safety.

"The pressure is off us a little, we've just got go and try and win our game," Crossley told BBC Radio Sheffield.

"If Leyton Orient and Walsall get beat on Saturday then the pressure on them will double."

He continued: "I have to admit that four or five games ago I thought we'd gone, but we're giving it our best shot."

Crossley represented Wales and played for Nottingham Forest in the 1991 FA Cup final in a career that saw him make 451 league appearances.

Despite his impressive playing career, the former custodian thinks coaching the Spirietes to survival would rank amongst his finest accomplishments in the game.

"It would be better than getting promoted last year because I think from Christmas we were expected to achieve that, and we were one of the best teams in the league," he explained.

Chesterfield travel to Yeovil on Saturday needing to win to keep their chances of staying up alive.