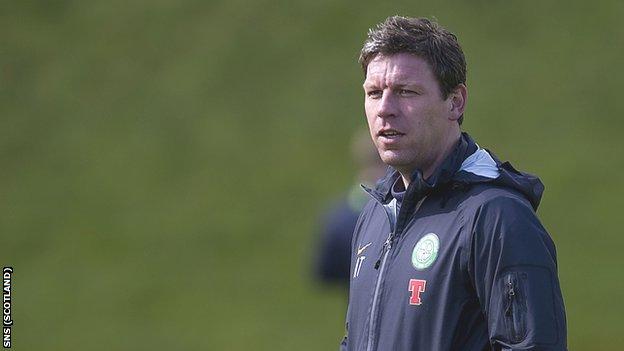 Celtic assistant manager Alan Thompson is pleased Calum Murray will officiate Sunday's game against Rangers and will warn his players to be disciplined.

"I think Calum is a good referee. I've not had any problems with him in the past," said the Old Firm veteran.

"He speaks to the players and us. I've got a lot of respect for him."

Murray was named on Wednesday as a replacement for Craig Thomson, who could not fulfil his refereeing obligations for family reasons.

Celtic manager Neil Lennon appeared in front of a Hampden disciplinary panel to explain his behaviour towards Murray during that Old Firm game, but had to serve no further punishment after being sent off at half-time.

"I think it was a fair hearing and everything went well," said Thompson.

"Because it is Neil everything gets blown out of proportion. Things like that have gone on for years and years and they will do for years to come."

On the subject of players keeping their discipline, he added: "It becomes difficult to keep 11 v 11 in high-intensity games.

"It's tough for the guys in the middle and hopefully they'll get them right on Sunday.

"But since we've been in the door we've stressed discipline in every game, not just in Old Firm games."

And Thompson, sent off three times in Old Firm games at Ibrox, joked: "That's a bit hypocritical coming from me."

The Englishman will be in the technical area while Lennon serves the second of his two-match ban for comments he made about Willie Collum after the Scottish League Cup final.

Thompson, though, is concerned the noise created by the fans might make communication with Lennon more difficult than at Fir Park last week.

Lennon has been issued with another notice of complaint by the Scottish FA for his conduct after Celtic's Scottish Cup semi-final defeat by Hearts.

"Neil regrets his reaction after the game," said the former Celtic midfielder, who has been performing the club's media duties with coach Johan Mjallby in place of Lennon.

"Hopefully he'll get a fair hearing when that comes round.

"He might get another ban; no doubt he will but we'll have to deal with that when it comes."

Thompson relishes the thrill of Old Firm games but is well aware of the effect the result has on his emotions.

"They are great days if you win them, as everyone knows," he added.

"If you lose them you want to bury your head in the sand and go missing until your next game.

"Hopefully on Sunday after the 90 minutes we'll be on a high."