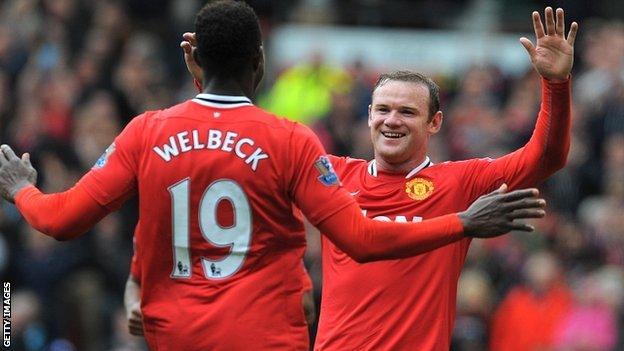 Wayne Rooney and Danny Welbeck could be a Manchester United strikeforce as potent as Andy Cole and Dwight Yorke according to manager Sir Alex Ferguson.

Rooney and Welbeck scored three in the 4-4 draw with Everton on Sunday.

"There were a lot of references to the Yorke and Cole thing and there were similarities. Wayne is 26, Danny is 21 and you would think that for the next few years they can only get better."

Welbeck has started alongside Rooney in three of United's last four games, in preference to Mexican international Javier Hernandez.

Ferguson, who says Monday's game is "the derby of all derby games", believes that the blossoming understanding between his two England international strikers was one positive aspect of a draw that allowed Manchester City to close the gap in the race for the title.

"With Danny being fit again and playing consistently with Wayne it has developed," he added.

United strikers - past and present

"I thought Welbeck's movement was fantastic, he played really well. Attacking wise we were terrific in the second half, really brilliant."

Cole and Yorke scored 35 league goals between them in United's Treble winning season of 1999.

Welbeck, with nine goals, and Rooney, second top-scorer in the Premier League with 26 goals, have the same combined total for the current campaign.

Comparisons between the two strike pairings were fuelled by similarities in the build-up play that preceded Rooney's second against Everton and the way Cole combined with Yorke to score against Barcelona in November 1998.