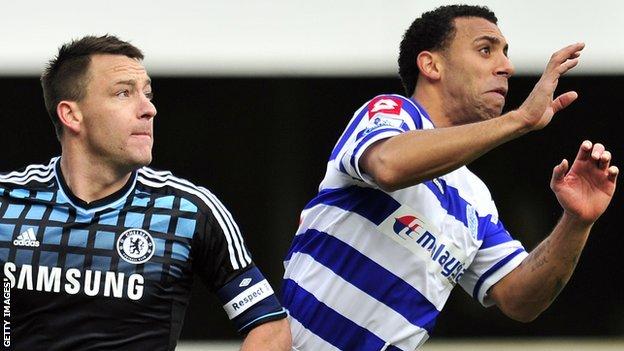 Anton Ferdinand says he will not let any off-field factors affect his performance when his QPR side meet Chelsea on Sunday.

Ferdinand is set to line up against John Terry, who will stand trial in July accused of racially abusing him.

"There is a big rivalry between the two clubs but, with everything that has happened, I know some fans will target me," he told the Evening Standard.

"All I can say is that it won't upset my game."

The Premier League has cancelled the customary pre-match handshakes because of the legal case involving Chelsea captain Terry.

Ferdinand, 27, added: "My team-mates have said nothing to me about it because we are just treating it as a normal game.

"It is not about me or the current situation, it is about QPR and staying in the division."

Rangers boss Mark Hughes is glad the Premier League acted over the handshakes, therefore preventing the game attracting attention for the wrong reasons.

"The decision was made last night [Thursday] and it takes all the build-up before the game out of the equation," said Hughes. "I think that is what we were conscious of before the FA Cup game [in January].

"From our point of view we have just been focusing on preparing for a very important game and the wind has been taken out of people's sails regarding the handshake issue."

QPR are two places above the relegation zone but by the time they kick off at Stamford Bridge they could find themselves in the bottom three, depending on Saturday's results.