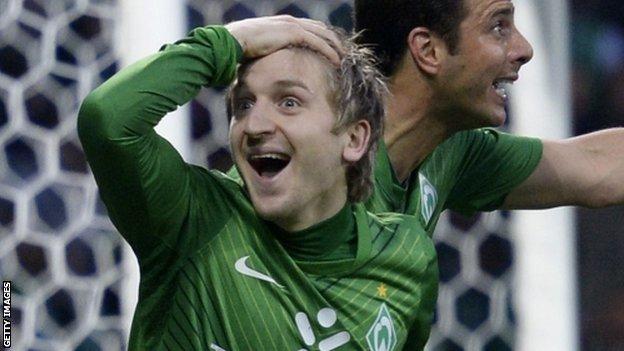 The Champions League finalists have settled on an undisclosed fee with the German club for Marin who will move to Stamford Bridge in the summer.

The 23-year-old German international, who can play as either a winger or attacking midfielder, made two appearances at the 2010 World Cup.

Marin said: "I had a good time with Werder but I am looking forward to the challenge of the Premier League."

Bremen's director of sport Klaus Allofs added in a statement: "We have always said that we would be open to talk if any of our players receives a good offer which was also interesting for Werder.

"In the coming weeks, we will deal with the last formalities. We wish Marko all the best for this new challenge."

Marin, who was born in Yugoslavia, began his career as a youth player with Eintracht Frankfurt before moving to Borussia Monchengladbach at the age of 16, making his Bundesliga debut in 2007.

He scored eight goals for Bremen and, according to OPTA, provided 24 goal assists, with only two other players managing more in the Bundesliga in that period.

He made his Germany debut in 2008 but he has spent much of this season out injured and may not make coach Joachim Low's squad for Euro 2012.