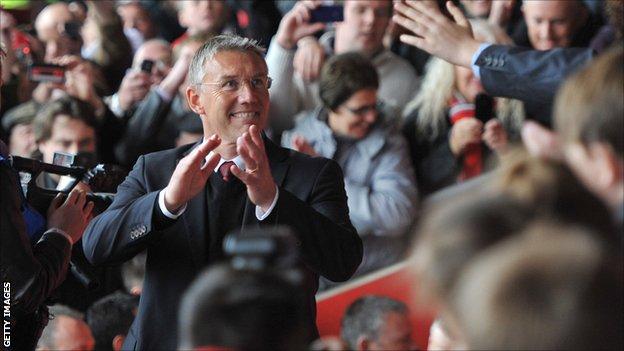 Southampton boss Nigel Adkins says he intends to be at the club for a "very long time" and has quashed any doubts about his future at St Mary's.

Adkins appeared to cast doubt on his position on Saturday despite guiding Saints back to the Premier League.

But the 47-year-old former Scunthorpe boss now says he is going nowhere.

"I have got no intention of leaving, I am very proud to be here, I want to stay at this fantastic football club," Adkins told BBC Radio Solent.

Saints sealed promotion with a 4-0 win over Coventry after a seven-year absence from the top flight, having only gone up from League One 12 months ago.

But speaking after the game, Adkins was less than euphoric, saying: "There will be a time down the road where there will unfortunately be a parting of the ways.

"I've got a long-term contract but you know what football is like in this modern era.

"But I'd like to think that as part of the Southampton journey I've thrown everything into it.

He continued: "I'm very passionate about that and when that sad day comes - and when it does hopefully it will be done in the right manner - I'll be very proud of what we've done today."

But in an interview with Radio Solent on Monday morning, Adkins, who has been in charge of Southampton since September 2010, clarified his situation by saying: "Those comments came at the end of about two hours of post-match interviews on a very emotional day."

He added: "I love being Saints manager, I've got a long-term contract and I want to be Southampton for as long as possible.

"I have no plans to leave. The objective is to be at Southampton for a long time, and I want a right good crack at the Premier League."