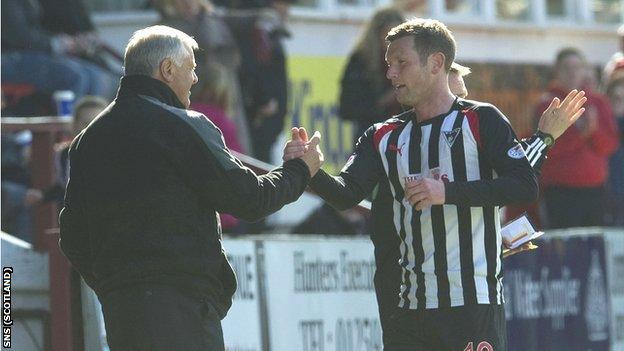 Dunfermline manager Jim Jefferies and double goalscorer Andy Kirk were united in their hope that St Mirren might take points off Hibernian on Sunday.

Bottom-side Pars' 3-0 win over Aberdeen reduced the gap on relegation rivals Hibs to three points but Pat Fenlon's men have that game in hand in Paisley.

And Kirk added: "Hopefully a bit of luck and the result go our way tomorrow and it keeps it exciting for us."

"I wasn't too happy with the first-half performance, but in the second half when we got the goal we were much better," said the Fifers' manager.

"We controlled the game and we restricted Aberdeen to very little."

Dunfermline's first Scottish Premier League win at home all season was secured through a Joe Cardle strike in 56 minutes, followed by Kirk's brace that put the result beyond question.

"I felt we played a lot better last week [a 4-4 draw at St Mirren], but today was about the result and we got it," added Jefferies.

"Hibs are going to be under more pressure because they know Dunfermline have had a win to close the gap.

"They're still in the driving seat and they are capable of getting a result but we've done our bit and it gives them a wee bit more concern tomorrow.

"Hopefully we can get a favour and we can go into the next game and see if we can get it level."

"Hopefully, it's come at the right time for us and puts a bit of pressure on Hibs," he told BBC Scotland.

"The first goal is an important thing for us and, even last season, when we got the first goal, you could see the difference in the team and normally we would go on to win the game.

The effort, workrate and commitment has been there and the supporters have seen that

"We got the goal and went ahead and the confidence grew and we got the second goal and you get that belief that we can go on to win the game.

"It was important for us as well to keep the clean sheet with the goal difference.

"We are clawing things back. It is out of our hands tomorrow, but hopefully things can go for us.

"I think you've got to believe you can get out of the position we are in."

The Pars' next match is away to Inverness on Wednesday before a trip to Easter Road to play Hibs on 7 May.

Former Hearts player Kirk added: "In a lot of the games, we have played well and we were unfortunate and we've shot ourselves in the foot with goals we've conceded.

"The effort, workrate and commitment has been there and the supporters have seen that.

"They're entitled to have their moans and groans at times, but the bunch of guys are honest and work hard every day in training and we go out there and try to do the best we can.

"It was important that we won today. It gives us a fighting chance."