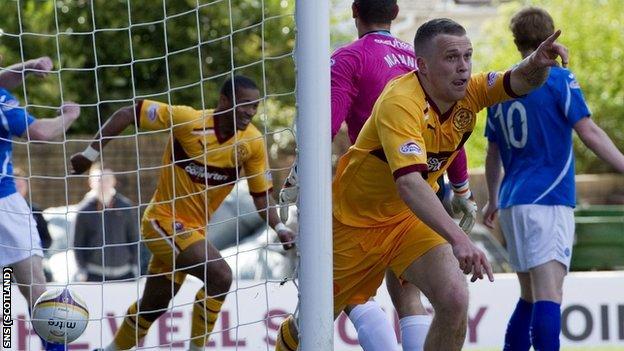 Motherwell manager Stuart McCall insists his side will not be complacent after opening up a five-point gap over fourth-placed Dundee United.

With Rangers unlikely to feature in Europe next season, 'Well are in prime position to join Celtic in the Champions League qualifiers.

"It was huge," said McCall after his side beat St Johnstone 5-1.

"There's still a lot of football to go, still nine points. It's a position I'd rather be in than not."

Michael Higdon's penalty, strikes by Nicky Law and Jamie Murphy and a double by Henrik Ojamaa gave 'Well a handsome win against Saints.

And McCall highlighted the contribution of winger Chris Humphrey in the Fir Park rout.

"His pace terrified them," said McCall. "His last month's performances have been outstanding for us.

"There were a lot of pleasing factors. To score five goals is terrific at any level but against a normally resolute St Johnstone, it was pleasing.

"I'd have settled for a 1-0 but we did say we wanted to come out and show the quality we've got. In patches, we did that. We defended quite well when we had to.

"We finished the job in style. It's nice to get all your forwards scoring goals and in confident mood for what we'll need; a big push in the last three games.

"I thought some of our football was excellent and we took the goals really well.

"It's no good us looking at other results if we can't make our own performances count and that was the key for the lads, to go out and get the three points and they did it in style."