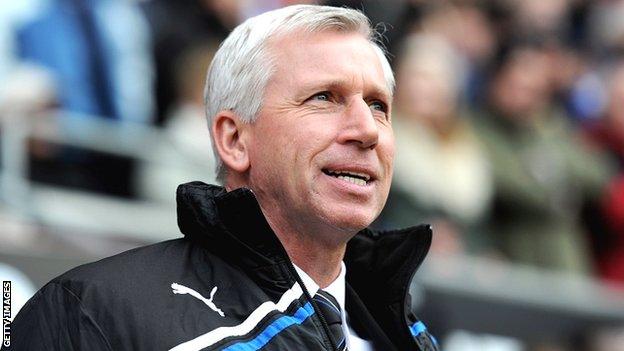 Newcastle manager Alan Pardew has urged his side to recover from their 4-0 loss at Wigan and secure qualification for next season's Champions League.

The Magpies are four points behind third-place Arsenal and if Tottenham beat Blackburn, Pardew's men will drop to fifth with three games left.

"We need to make sure in the remaining three games we keep in the hunt for the Champions League," he said.

"We're still very much in it. We need to rebound [at Chelsea] on Wednesday."

Newcastle travel to Stamford Bridge knowing victory will put them a point below Arsenal heading into the final two matches.

But for that to happen they will have to improve on their performance at the DW Stadium, where their six-game winning run was ended.

"We just didn't match their intensity. Forget shape, systems and so on, intensity is everything in football.

"At Chelsea, we will show the intensity we're used to showing and give them a far stronger game."

Shaun Maloney slotted a third and Franco di Santo's exquisite chip saw a stunned Newcastle side go into half-time 4-0 down.

But Wigan were worthy winners and Newcastle's run-in - after Chelsea they host Manchester City and finish at Everton - does not look kind.

"For the first two goals we were really loose and disorganised," Pardew explained. "It was not until half-time that we got back to our level.

"We should have nicked a goal and that would have changed the mood. But Wigan were terrific and deserved to win by the scoreline.

"Look at the goals and some of their play - that was as good as we've faced. We talked about matching their fight but we could not do that.

"You'd have to say we got beat by the better team."