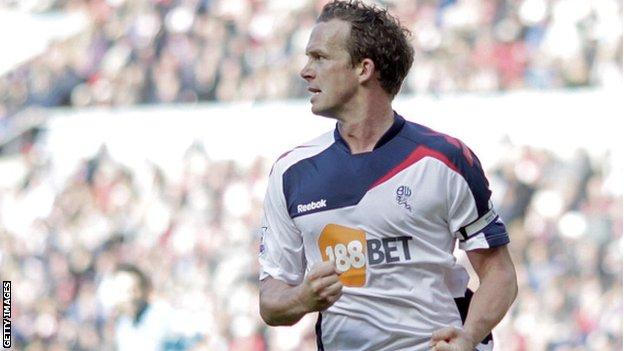 Kevin Davies insists Bolton are not looking for favours from others as they fight to stay in the Premier League.

The Trotters remain in the relegation zone, level on points with 17th placed QPR with three games remaining.

"It's crucial we stay unbeaten until the end, we won't be looking for favours," said captain Davies after the 2-2 draw at Sunderland.

Davies scored both of his team's goals at the Stadium of Light as Bolton extended their unbeaten run to three games.

And the 35-year-old believes the key to survival will be prolonging that run to the end of the season.

Two of Bolton's remaining three games, Tottenham Hotspur and West Brom, are at home before they round off a difficult campaign at Stoke on 13 May.

"We won't be looking for any favours," added Davies, who has scored seven goals this season.

"Tottenham come to us on Wednesday and we have to win that and then hopefully take the momentum into West Brom at home next Saturday.

"If we can do that then hopefully the last game of the season will not be too crucial for us."

Bolton manager Owen Coyle echoed Davies' thoughts after the battling performance at Sunderland, insisting Bolton's future remains very much in their own hands.

"We have taken 14 points from the last 24 - it probably should have been 16 on today's showing - so we know we are on a good run of form," said Coyle.

"We will decide what happens to Bolton Wanderers. It's in our own hands to go and do that."