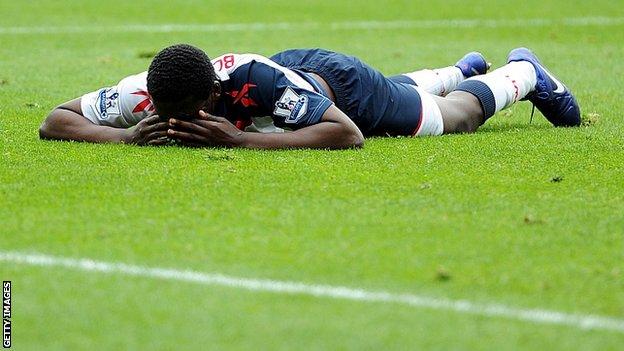 James Morrison came off the bench to score a last-minute equaliser as West Brom put a severe dent in Bolton's chances of avoiding relegation.

Morrison arrived at the far post to volley in Simon Cox's cross as the visitors fought back from 2-0 down.

Martin Petrov had put Bolton in front from the penalty spot.

A Billy Jones own goal doubled Wanderers' lead, but they were stunned as Chris Brunt lashed home before Morrison completed West Brom's rally.

QPR's late winner against Stoke capped a devastating finale for Owen Coyle's men, who must now beat the Potters at the Britannia Stadium next Sunday to stand any chance of staying up.

They paid the price for sitting too deep in an attempt to protect their 2-0 advantage and West Brom were rewarded for throwing everything at their opponents in the closing stages.

Brunt's crisp finish came only three minutes after Jones had scored in his own net and Morrison's equaliser on his return from a knee injury earned new England manager Roy Hodgson a point in his penultimate match in charge of the Baggies.

Many of the travelling West Brom fans showed their support for Hodgson by kitting themselves out in England shirts for the occasion.

James Morrison was making his first appearance since 25 March following a knee injury.

And their relaxed mood seemed to infect the Albion players as Bolton made the sharper start to an open first half.

Chris Eagles and David N'Gog missed with early sighters before a low cross from Petrov on the left wing eluded a clutter of players in the middle and was spooned over the bar by Kevin Davies at the far post.

At the other end, Brunt side-footed wide from a great position before Shane Long's shot on the turn was deflected onto a post by Adam Bogdan.

Five minutes later, Bolton were awarded a penalty as Keith Andrews was penalised for a sliding challenge on Mark Davies.

Although the Irish midfielder seemed to play the ball, Youssouf Mulumbu added to the evidence in Bolton's favour by making contact with Davies from behind.

After a slow start to the second period, Baggies midfielder Graham Dorrans wasted a good opening when his tame shot from close to the penalty spot was easily saved by Bogdan.

Soon afterwards, Liam Ridgewell got in behind the Bolton backline but could not beat Bogdan at his near post.

Petrov remained Bolton's most likely source of an equaliser, with his pace and delivery from the left wing.

One cross picked out Davies in the middle, and the captain's header was saved at full stretch by Ben Foster.

Substitute Ivan Klasnic then sent Petrov careering down the left again, and his low cross sparked a comedy of errors with Ridgewell diverting the ball off Jones and into the net.

West Brom hit back almost immediately as Brunt arrived from midfield to lash home a loose ball from the edge of the box.

And just when news of QPR's crucial goal was filtering through to the home fans at the Reebok Stadium, Morrison further darkened their mood by popping up at the far post to round off a splendid passing move.