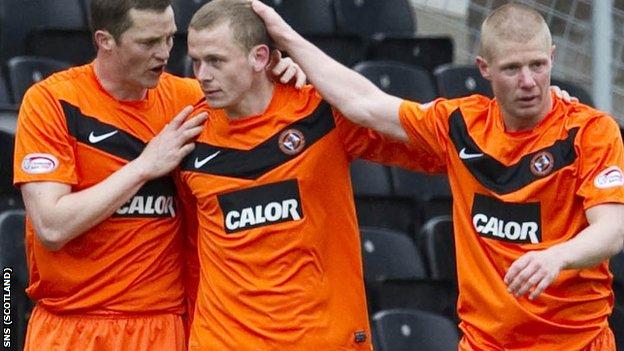 Scott Robertson headed in a hastily-taken corner to give the hosts a 21st-minute lead.

In the second-half, claims for a Celtic penalty were waved away after the ball appeared to strike Keith Watson's arm inside the United area.

Gary Hooper came close to restoring parity in the final 10 minutes, but dragged his shot wide of the mark.

The defeat was only Celtic's fifth of the season on their way to claiming the title, but guarnatees United a Europa League slot and all but cements fourth place.

After 10 minutes played, Kris Commons picked out Hooper with a defence-splitting pass from the heart of midfield, but the cutback aimed at Brown on the edge of the penalty area was cleared.

A quickly-taken corner in the 21st minute minute allowed Robertson to leap unchallenged on the six yard line to nod the ball past a stationary Forster in the Celtic goal and spark the match to life.

Commons should have done better with a long-range short from the edge of the United penalty area as the half hour mark approached, then Hooper himself blasted in an effort from the same distance that Dusan Pernis clawed wide.

Celtic could have levelled the scores in the only minute of stoppage time when Commons flighted a low ball across the face of goal, but Anthony Stokes failed to reach it at the back post.

Immediately after the break, Robertson blasted a long-range effort wildly over the Celtic bar, then at the other end substitute Tony Watt leapt on to a Lustig cross but his header inched wide.

Moments later, youngster Watt blasted in a shot that Pernis parried wide of the United goal, then Dixon's close-range effort was blocked by Mulgrew and John Rankin failed to pick up the loose ball.

With 15 minutes remaining, Emilio Izaguirre's cross on the left appeared to strike the arm of Watson inside the United penalty area, but referee Iain Brines waved play on.

Inside the final 10 minutes, Hooper dragged an angled shot inches wide of the mark as the visitors pushed for a leveller.

Quality defending by Mulgrew prevented Russell targeting the Celtic goal in the last minute of regular time, but a late flurry of pressure from the visitors failed to find the goal that would have avoided defeat.