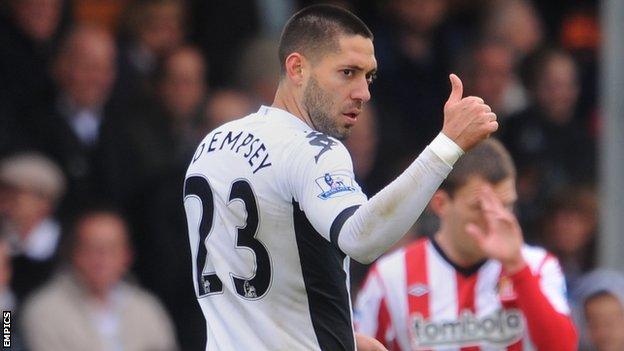 Clint Dempsey scored his 23rd goal of the season to help Fulham to a deserved victory over Sunderland.

Dempsey, 29, added to his growing reputation by curling in a 25-yard free-kick to put the home side ahead.

Sunderland equalised when Phil Bardsley arrowed in a fierce shot only for Moussa Dembele's deflected strike to restore Fulham's lead within a minute.

The visitors had a great chance to level late on but Fraizer Campbell slid a close range shot wide.

The victory moved Fulham just a point shy of their record haul of 53 in a Premier League season - set in 2008-09 when new England manager Roy Hodgson was in charge.

The Cottagers, with boss Martin Jol back in the dugout after missing the last two games with a chest infection, oozed confidence after four wins from their past six games and they passed the ball around with authority and fluency.

They took the lead through Dempsey and, while the American has already been attracting interest from potential suitors, his curling free-kick should add a few more clubs to his list of admirers.

Apart from the threat of Dempsey, other key Fulham contributions came from the gliding forward runs of Dembele and the midfield promptings of Danny Murphy, as well as the energy of winger Damien Duff.

Some of Sunderland's players knew their futures could be on the line with manager Martin O'Neill expected to embark on a summer of rebuilding in readiness for next season, when he hopes to stamp his mark more firmly on the side.

O'Neill may have steered his team away from relegation trouble since taking over in December but, despite showing their usual desire and determination, they lacked a goal threat until their equaliser came from an unlikely source.

Ji Dong-Won laid the ball off to right-back Bardsley and he hammered in a precise low strike past Fulham keeper Mark Schwarzer for only his second goal of the campaign.

The Black Cats then proved the adage that you are most vulnerable after scoring as they immediately went behind again.

Dembele ran unchallenged toward the visitors' goal and let fly with a strike which took a deflection off Michael Turner before looping into the top corner.

The goal reasserted Fulham's superiority and Dempsey was only denied a second when he had a shot cleared off the Sunderland goal-line by Jack Colback.

The introduction of Nicklas Bendtner and Campbell helped Sunderland stage a late rally and they almost punished Fulham for their profligacy.

Craig Gardner's long ball was knocked down by Bendtner but, with just keeper Schwarzer to beat, Campbell sent his angled shot wide of the far post as Fulham's last home game of the season ended in victory.

Fulham manager Martin Jol: "We had 49 points [before the game] and we were happy but this was the last game at home and you want to finish on a high note, which we did.

"We've got a nice combination. Young and experienced players. After November/December we have not looked back and are probably in the top six of the form table.

"Hopefully, he [Dempsey] will be here and our player next year."

Sunderland boss Martin O'Neill: "I think that we created some great openings, particularly in the second half.

"That [we didn't take them] was a frustration for us but we played well. Credit to Fulham as they played well themselves but we are a bit frustrated.

"We haven't got a player in double figures [for goals] this season and that speaks volumes for us."