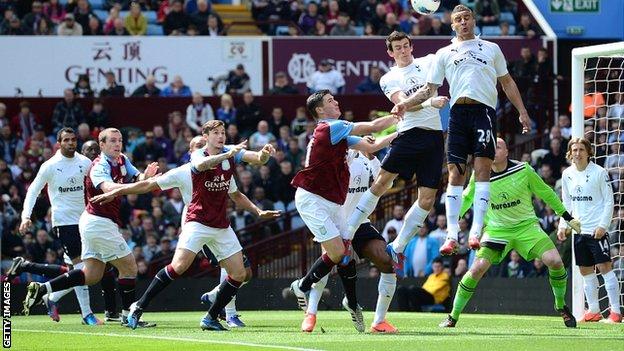 Tottenham squandered the chance to reclaim third spot as Aston Villa all but secured their Premier League safety with a vital point.

Ciaran Clark put Villa ahead with a 25-yard shot that deflected off William Gallas and flew into the top corner.

Gareth Bale was denied by an alert Shay Given save but Spurs lost Danny Rose, who was sent off for a dangerously high sliding challenge on Alan Hutton.

Arsenal's surprise draw at home to Norwich on Saturday had offered Spurs the opportunity of securing third with two closing victories.

That would have meant they would not be reliant on Chelsea losing to Bayern Munich in the Champions League final for a place in European club football's elite competition next season, as the Premier League's fourth-placed team would be.

But despite having the majority of possession in the final third they could not conjure the necessary moments of inspiration and a win over Fulham at White Hart Lane next weekend will not be enough for third if Arsenal beat West Brom at The Hawthorns.

Villa set an unwanted club record with only four wins all term, and even a victory at Norwich next weekend will not prevent their lowest points tally in 20 years as members of the Premier League.

They started brightly as Spurs struggled to find their fluency and Stephen Ireland slid a perfect through ball.

This is the second season in succession that Spurs have had a player sent off at Aston Villa.

How Villa would have wished it had been the injured Gabriel Agbonlahor on the end of it instead of Emile Heskey, who has scored only once all season, and the veteran striker was denied by a sliding tackle from Younes Kaboul.

They began the second half positively and Adebayor was inches away from making decisive contact with Bale's left-wing cross, but they then lost Rose after former Tottenham full-back Hutton was left in agony and unable to continue.

If anything the dismissal inspired the visitors to play with greater purpose and they drew level when Dunne slid in to trip Sandro as the Brazilian attempted to ghost past him, and Adebayor coolly dispatched the penalty into the corner.

Sustained pressure from the Londoners, and a total of 19 corners, could not lead to the winner and Friedel needed to come swiftly out of his area to clear the danger as Villa substitute Andreas Weimann broke through.

Villa are now safe barring an unlikely series of results going against them on the final day and a 17-goal swing in Bolton's favour. But despite avoiding the threat of relegation, the derogatory banners regarding McLeish were still evident at the final whistle as disgruntled Villa fans digested a record-equalling 17th draw in this troubled campaign.

"I felt we played well enough we got a goal back and just couldn't get the second.

"Danny [Rose] is not an overly-aggressive player, he's a good little footballer, I didn't know whether [Charles] N'Zogbia pushed him into the challenge.

"We absolutely dominated the second half, it was all one-way traffic but it just wouldn't come.

"It makes for an exciting last day of the season, it's all to play for next week, there are so many different permutations. We can't do any worse than fourth if we win, so that's what we've got to make sure we do."