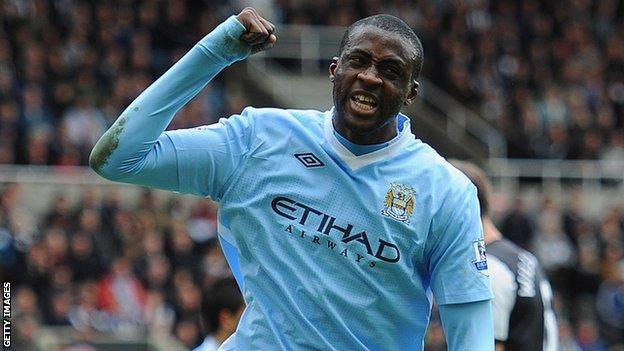 Manchester City moved to within touching distance of their first title for 44 years, as Yaya Toure scored twice to secure a crucial victory over Newcastle United.

He then added a second from close range with time running out.

City now know that victory over QPR in their final match of the season will secure the Premier League title.

"Manchester City are one victory away from the title now. This was a vital win for Roberto Mancini's men but it was one they deserved. Roberto Mancini got the big calls right and perhaps made the most important substitution of the season.

"Bringing Nigel de Jong on for Samir Nasri was not a defensive substitution because it allowed Yaya Toure to roam free further up the field. It was the moment that changed the game. Toure scored twice, City won and the title is theirs to lose.

"Mike Summerbee, who scored here when City last won the title in 1968, was in the crowd with a tear in his eye. It has been a long wait for City but it is almost over."

This was a dominant display by City, inspired by Vincent Kompany's defensive generalship, David Silva's prodigious work in midfield, stellar finishing by Toure and a workrate and ambition that glowed throughout the team.

The omens must have given Roberto Mancini's men cause for hope and optimism before kick-off.

It was at this ground on 11 May 1968 that City won to clinch their last league title. Some 44 years on, history repeated itself as City moved to within three points of the prize that has eluded them for so long.

While it was understandable that much of the attention focused on City, Newcastle were chasing a prize of their own.

Arsenal's 3-3 draw with Norwich City had opened the door to Champions League qualification.

It was fitting, then, that Sir Bobby Robson - the last manager to lead Newcastle into Europe's top club competition - had been immortalised before kick-off as the club unveiled a statue to honour his memory.

But it was City who dominated the opening 30 minutes. Sharper to the ball, swifter to use it, City forced Krul, the Newcastle goalkeeper, into action on a number of occasions.

The Dutchman was forced to turn away low shots from both David Silva and Sergio Aguero, while Carlos Tevez went close with a curling free-kick.

It took Newcastle half an hour to produce their first effort on goal, but more soon followed.

Demba Ba fizzed a 25-yard shot over Joe Hart's crossbar. Moments later the Newcastle striker saw his goalbound shot blocked by Kompany after a clever run by Jonas Gutierrez. The ball ran to Ben Arfa but his low shot was well saved by Hart, low to his left.

It was City, however, who had the best chance of the half shortly before the interval. The mercurial Silva broke clear down the left and cut the ball back to Gareth Barry near the penalty spot.

The England midfielder's first shot was blocked by Fabricio Coloccini, while his second found a path to goal only for Davide Santon to clear off the line.

City maintained their momentum after the restart with Tevez fired high and wide, before testing Krul from distance.

"The long and barren years, the memories of the mocking banner that used to hang from one corner of the Stretford End recording City's years without a trophy until they won the FA Cup last season, will feel an age away with victory against QPR and former manager Mark Hughes next week."

As the half wore on Mancini's side were struggling to convert their lion's share of possession into clear-cut chances.

Then came what proved to be an inspired substitution. Nigel De Jong replaced Nasri on the hour mark to allow Toure to push into a more advanced position behind Aguero and Tevez.

The Ivorian made an instant impact in his new role. Collecting a neat lay-off from Aguero, he curled a wonderful low shot beyond Krul's outstretched left hand to spark scenes of jubilation in the away end and on the City bench. It was the first goal Newcastle had conceded in 497 minutes of football at the Sports Direct Arena.

City should have made sure of the result four minutes later when Silva lofted a delightful through-ball into the path of Aguero only for the Argentine to nudge his shot inches wide of the right-hand post when clean through on goal.

Newcastle almost made City pay for their profligacy, when Ba and Papiss Cisse connected only for the latter to head high and wide from close range.

City were in charge, however. Aguero put Toure through on goal only for the City midfielder to slip at the crucial moment. Edin Dzeko turned a shot narrowly over the bar from the resulting corner.

It mattered not, though, when Toure made sure of the result and perhaps the title a minute from time, as he finished a typically swift City counter-attack with a close-range finish.

Manchester City manager Roberto Mancini: "It is not finished. It is important that we get three points next week, we need a big effort - there is one game more. I think for us it should be a normal week. We don't change nothing, QPR will be tough, they are fighting for relegation. Nothing changes. It is ours to lose. It doesn't depend on other teams anymore.

"Toure's first goal was special, like the one he scored in the FA Cup final for us last year. This one may be more important if we can finish the season off.

"Newcastle are a good team, they have had a fantastic season. But we deserved to win today, we scored two goals and created three of four other chances to score more. Everyone played really well, the whole team played really well."

Newcastle manager Alan Pardew: "We knew the first goal was going to change everything. We didn't get it but we had a few chances to. Once that goal went in, we had to push on and that opened us up a bit.

"It was a great performance by my team. You have to say Manchester City were brilliant today. When you can bring on one world star for another... that freshness just made the difference today. But it is never over in the race for the Premier League title, no matter who your opponents are.

"We have great potential at this football club. We are back where we should be, we have tradition and history that few clubs can match. If we can win at Everton next week it will put massive pressure on Arsenal and Spurs. They have go to win now."