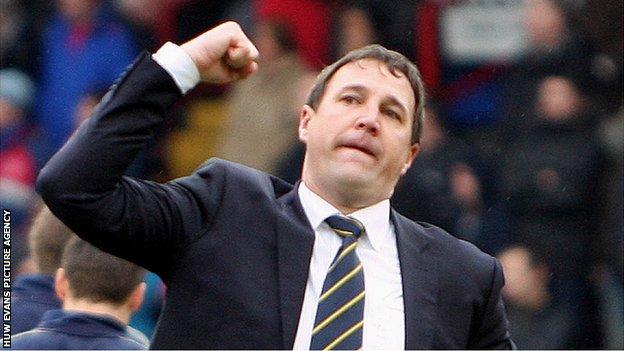 The Bluebirds came from behind to beat Crystal Palace 2-1 and book a play-off spot for the third season in a row.

Cardiff face West Ham at home on Thursday 3 May, before the second leg at Upton Park on 7 May.

"This group of players have already been through this sort of thing this season, with the Carling Cup semi-final and final," Mackay said.

"That will benefit us. We need a timeline of how organised you are going into the semi-final and what you do in that time leading up to it.

"I have been in the semi-final situation as a player with West Ham, Norwich and Watford. It is about staying calm and having a game plan."

Mackay's team lost on penalties to Liverpool in the Carling Cup final earlier this season, having held the Premier League side 2-2 after normal and extra time.

The Bluebirds have also been the nearly men of the Championship play-offs, losing last season in the semi-finals to Reading and going down in the 2010 final to Blackpool at Wembley.

Cardiff's inferior goal record saw them narrowly miss out on the play-offs in 2009.

Mackay's side must first overturn the Hammers, who missed out on automatic promotion by two points behind Southampton while champions Reading were three points ahead.

The other semi-final sees a tussle between former Premier League sides Birmingham and Blackpool.