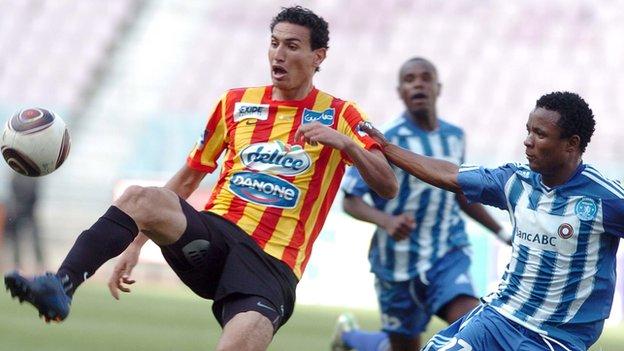 Title holders Esperance took a huge step towards a place in the group phase of this year's African Champions League with a 6-0 thrashing of Dynamos of Zimbabwe on Saturday.

Tunisian sides did well over the weekend, with Etoile du Sahel also earning a big win - a 4-1 victory over Amadou Diallo of Ivory Coast.

There was a good away win for Zamalek of Egypt over MAS of Morocco, while Mali's Djoliba and Nigeria's Sunshine Stars drew 1-1 and DR Congo's TP Mazembe beat Sudan's Al Merreikh 2-0.

Esperance's win came thanks to an opener from Walid Hichri in just the 7th minute, with Karim Aouadhi doubling the lead before 15 minutes had been played.

A brace of goals from Tunisian international Youssef Msakni, plus one from Yannick N'djeng and Iheb Msakni rounded off the victory.

Etoile's win was less emphatic, with the Ivorian visitors keeping in touch with the score at 2-1 until six minutes from time, even though they had a man sent off.

Etoile also missed two penlaties during the match but late goals from Sassi and Bejaoui made it likely that they too will make it through to the last eight.

Zamalek also left it late - opening the scoring against MAS only in the 78th minute - but a 2-0 away victory represents a big stride towards qualification.

Mazembe have returned to the champions league after a one year suspension and seem intent on going a long way once again.

Ghana's Berekum Chelsea missed out on the chance to take a strong lead in their tie with former finalists Coton Sport of Cameroon after the game ended in a 0-0 draw.

Multiple champions Al Ahly of Egypt looked to have held on for a 0-0 draw in Bamako against Stade Malien but conceded in the 90th minute of the game and now have some work to do back home in Cairo.

In the final Champions League game on Sunday Al Hilal of Sudan were held to a 1-1 home draw by visiting AS Chlef of Algeria who will fancy their chances of making it through to the group stage.