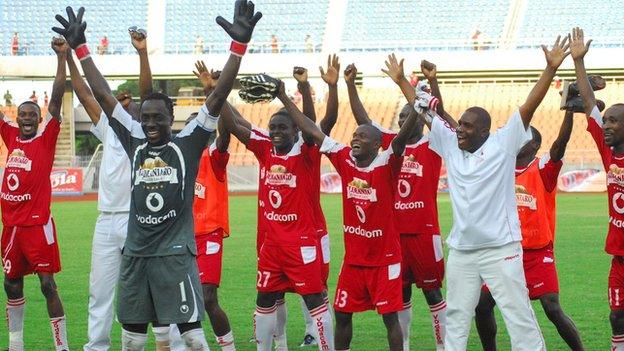 Tanzania's Simba have taken a big step towards a place in the next round of Africa's Confederation Cup with a 3-0 home win over Al Ahly Shandy of Sudan.

Last week Simba had to delay celebrating winning the Tanzanian title because of controversy at another game, but there was no doubt about this win.

All three goals game in the second half, with man of the match Emmanuel Okwi inspiring the team.

The goals came from Haruna Moshi, Patrick Mafisango and Okwi himself.

Mafisango had missed a penalty in the first half and it was 0-0 at the break - and the Simba coach Milovan Circovic admitted that his team were fortunate to record such an emphatic win.

"In Sudan we will defend our lead - I am sure we will go through."

The winners of these two-legged ties face the losing teams from the same round of the African Champions League for the right to go to the group phase of the Confederation Cup.

Elsewhere on Sunday, Nigeria's Warri Wolves earned a 3-1 win over visiting South African side Black Leopards and another team called "Leopards", this time from Congo Brazzaville, were beaten 3-2 in Nigeria, when Heartland got a late winner through Stanley Okoro.

Away goals could be important in both ties though, when the second legs are played in two weeks' time.

Angola's InterClube will be confident of making it through after their 4-1 home win over Al Amar Otbara of Sudan.

In other Confederation Cup matches, ASEC Mimosas of Ivory Coast were held to a 1-1 home draw by Morocco's CO Meknes on Saturday while Tunisia's Club Africain sealed a 1-0 victory away to Royal Leopard of Swaziland.