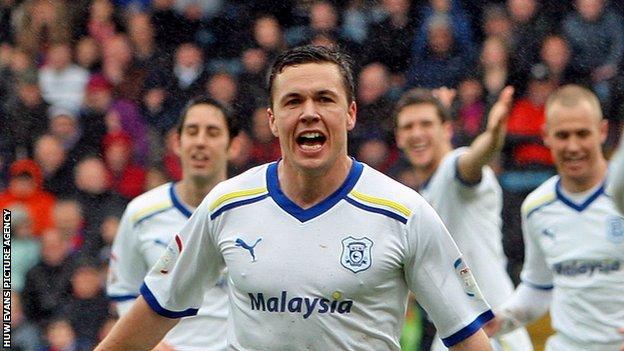 Cardiff City midfielder Don Cowie believes that the greater pressure will be on West Ham United when they clash in the Championship play-offs.

The first leg is at Cardiff City Stadium on Thursday, 3 May, with the return at Upton Park the next Monday.

"They've got a great squad, they've spent a lot of money and I'm sure there'll be a lot of pressure on them."

The Hammers just missed out on an automatic promotion place, having to settle for third as Southampton and Reading booked their Premier League spots for next season.

Cardiff also kept their hopes alive after Saturday's 2-1 win at Crystal Palace secured sixth place and the final spot in the play-offs.

"There'll be a lot of pressure on us within our dressing-room," added Cowie, who scored the winner at Selhurst Park.

"Now that we're in these play-offs we don't want to let it slip, we've got a great opportunity and we want to make the most of it.

"We go into the game on Thursday very confident that we'll definitely give West Ham something to think about."

Cowie's fellow Bluebirds midfielder Peter Whittingham, their other goal-scorer against Palace, says that despite West Ham's pedigree the sides should be evenly matched.

"It's going to be a hard game, we know what a great team they are and they've been vying for the top two all season," Whittingham said.

"But we're going into it full of confidence, we've not lost in a while so it's one of those games we're really looking forward to.

"It's always going to be a lottery in the play-offs, you need that little bit of luck and hopefully this year we'll have some.

"Maybe we've sneaked in under the radar a little bit and no one really knew who was getting sixth place.

"But we knew that we were confident coming down here and we knew if we played our own game and stuck to the task that we'd get the win."

Should Cardiff win through against West Ham, they will face one of two other former Premier League sides Birmingham and Blackpool in the play-off final at Wembley.