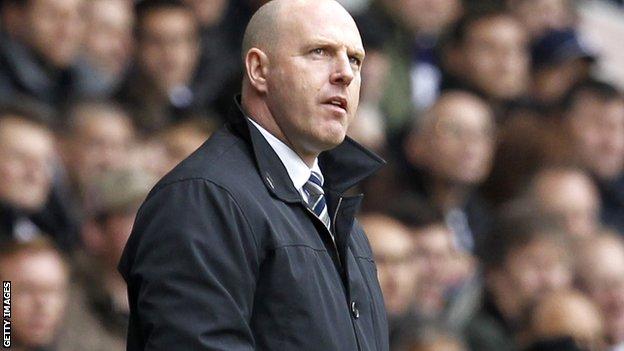 Blackburn manager Steve Kean says his side are "still in it" after their Premier League survival hopes were knocked by a 2-0 defeat at Tottenham.

Rovers, who are three points from safety, failed to muster a single shot according to Opta stats, and play in-form Wigan and Chelsea in their final two games of the season.

"We need two massive performances now, [but] we are still in it," said Kean.

"We need three points against Wigan and back-to-back clean sheets."

Blackburn have taken only three points from the last 21 on offer, yet Kean is confident his squad have enough battling qualities to avoid the drop after a difficult campaign.

"We have had some massive performances home and away this season," said Kean. "We have got to have belief, we have been written off many times but we have always bounced back.

"We've got Wigan up next - if we beat Wigan we go to Chelsea and we keep going, keep chasing.

"We've had many monumental performances this season, some really good home wins, some back-to-back clean sheets. We'll probably need that again and I have trust and faith in the lads."

Blackburn were second-best against Spurs and Kean admitted his side need to show improvements in their final two games of the season.

"I think today, going forward, we never got our passes off," he said.

"When you don't circulate the ball well enough and don't get quality into the front two you're not going to ask any questions of the defenders. That's frustrating."

Kean has endured a difficult season, with many Rovers supporters calling for him to lose his job, but his opposite number Harry Redknapp had some sympathy for the Scot.

"Steve can only work with what he's got," said Redknapp. "To go through what he's been through, and the abuse he has had, has been amazing.

"With all due respect, the players are probably in the sort of position they should be in, scrapping for their lives. He has not got world-class players."