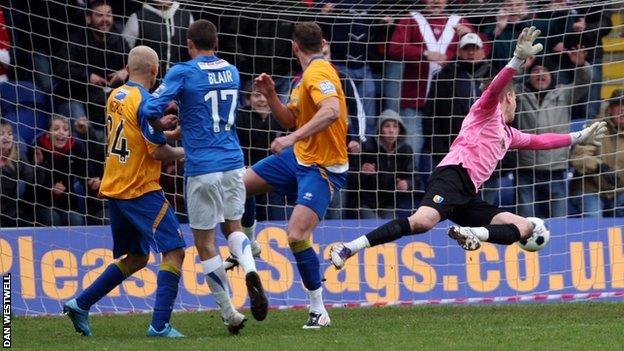 Mansfield went down to 10 men when Ritchie Sutton was shown a second yellow card for a late tackle on Blair.

York's Wembley trip on 20 May will be their second in eight days, after their FA Trophy final with Newport County.

It will be York's fourth game at Wembley in three seasons - but that outcome was a little harsh on a Mansfield team who were marginally the better side over the full course of a pretty drab 90 minutes.

Mansfield, often accused of opting for a direct approach and an over reliance on the long throws of Exodus Geohaghon, just about edged an untidy first half.

The excellent Adam Murray came close for the Stags, but his shot, after fine work by Lindon Meikle, was brilliantly diverted wide by defender Danny Parslow.

Murray's midfield partner Gary Roberts, whose quality stood out on a bobbly pitch which did little to encourage a passing game, also saw a fierce free-kick blocked.

York looked more measured in possession, allied to the pace of their front three, Ashley Chambers, Walker and Blair.

They were kept quiet before the break but, as entertainment levels increased after the interval, so did their threat.

Walker had a shot blocked, as did the impressive Blair, who also tested Alan Marriott with a decent low effort after cutting in from the right.

Mansfield were without 29-goal top scorer Matt Green following his red card in the first leg. But wing duo Louis Briscoe and Meikle were finding more room as the game became stretched.

Briscoe saw his shot beaten away by York keeper Michael Ingham and Meikle shot into the side netting after beating two men.

For the final 30 minutes, the Stags were on top, with Murray and Roberts bossing midfield and Geohaghon's torpedo throws and the pace and trickery of main threat Meikle always looking likely to bring a goal.

But York also had their chances, a combination of sloppy passing in the final third, a reluctance to shoot and some last-ditch defending ensuring that it stayed 0-0.

In extra time, Meikle almost broke the deadlock but his 20 yard-effort was brilliantly tipped over by Ingham before the rare moment of quality which decided the contest.

Blair headed home a brilliant left-wing cross from Walker, who spurned several openings for a clinching second as Mansfield threw everything forward in front of a sell-out crowd.

But, with a man advantage after Sutton's red card, Gary Mills's FA Trophy finalists booked in for yet another Wembley appearance.

"There's a lot of heartache in the dressing room. I personally feel we've let a lot of people down.

"A lot of people have come out and supported us. But all the chances, balls that have bounced in the box, we just couldn't convert into a goal.

"Looking at the game as a whole, it was always probably going to be one goal that won the game.

"We've got to come back stronger now."

"They've had a great run and all credit to them but, when you come into these play-off situations, it's about the two games.

"We got done with the throw for the goal at home and we had to concentrate a lot.

"But we got a clean sheet and we defended for our lives.