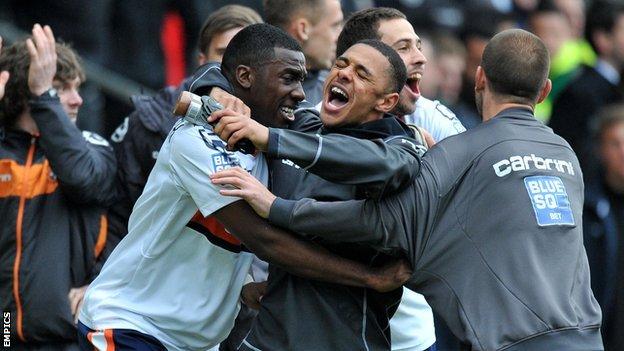 Luton Town booked their place in the Blue Square Bet Premier play-off final against York as they hung on to beat Wrexham on aggregate.

But Adrian Cieslewicz pulled one back for the home side on 63 minutes.

But the Hatters held on and will face York City - their 2010 play-off semi-final conquerors - at Wembley on 20 May.

The kick-off was delayed at the Racecourse Ground due to extra time being played in the other semi-final between Mansfield and York.

Chances were at a premium in the first half as both sides struggled to create openings, and Luton were perhaps fortunate to extend their aggregate lead from the spot, following a set-play in the 23rd minute.

The Hatters at Wembley

With three goals now required to level the tie, Wrexham eventually sparked into life in the 38th minute, Glen Little forcing a fingertip save from Mark Tyler.

But the Hatters were quicker out of the blocks following the restart when Stuart Fleetwood drilled firmly into Joslain Mayebi's gloves.

Andre Gray was perhaps already dreaming of a day at Wembley when he fired wide twice in as many minutes.

And, encouraged by that, when Morrell replaced Danny Wright in a bid to lead by example, Wrexham found their shooting boots.

On 63 minutes, Dean Keates wriggled free down the right flank to reach the by-line, picking out Cieslewicz to glance beyond Tyler.

And Morrell had the Hatters fans' hearts in their mouths 13 minutes from time when he smashed against a post before sidefooting the rebound into the net.

Now the chase was very much back on, as Wrexham tried to take the game to extra-time.

Had Greg Taylor's speculative long-range effort been more accurate he might have put the result beyond doubt.

But Luton, beaten on penalties by AFC Wimbledon at the City of Manchester Stadium a year ago, were forced to ride out eight fractious minutes of stoppage time before booking another day out at Wembley.

"Again we're 45 minutes short of the 90 minute game. We played some good stuff in the first half but didn't cause them enough problems.

"In the second half we changed it around a little bit and it's not really the Wrexham way to go with the big lad up top.

"We knew if we could get a goal then they would struggle and that's the way it was.

"I'm so proud of the lads not just for the second half but for the whole season. They've given me every bit of energy that they've got left.

"When you're a manager you can't ask for any more than that."

"I thought we were in total control but then a scruffy goal got Wrexham back into it and you have to give Andy's team credit.

"There was quite a way to go after they scored but we didn't get rolled over, as a lot of clubs who've come here have been this season.

"We showed different qualities to the qualities we showed in the first leg, and we were a credit to our club, as we were last week. It'll be a proud moment to walk out at Wembley, but we're desperate to win it now."